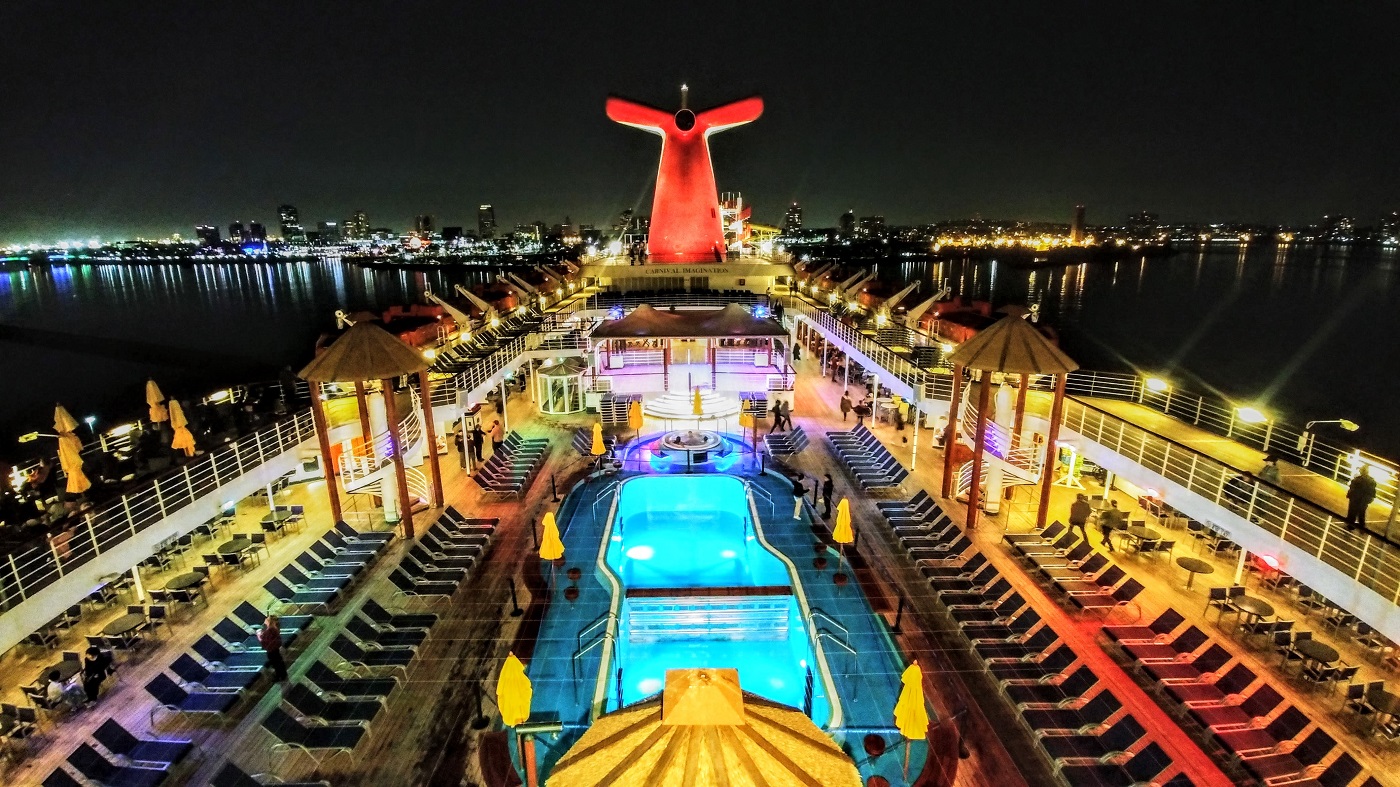 With cruise lines building cruise ships that are bigger, more exciting, and loaded with technology, it can be easy to overlook some of the more experienced vessels that carry a story of their own.

Yes, I said “experienced” rather than “older”.  Sometimes we look at the age of a cruise ship as its weakness rather than seeing it as a floating testament to its success in delivering thousands of happy vacations.

I am currently sailing on Carnival Imagination.  Tomorrow we dock in Ensenada, Baja California, Mexico.

I had delayed sailing on a Carnival Cruise Line Fantasy Class ship for some time now.  After all, these ships don’t have the flare and magnitude of some of today’s recent ships.  But after sailing on Imagination for only 36 hours I can already see why so many regular cruisers love this Carnival ship class.

First it should be noted that Carnival Imagination underwent a refurbishment in 2016 in which several upgrades took place.  Some noteworthy additions to the vessel were a new and improved WaterWorks with a 300-foot-long waterslide, Guy’s Burger Joint, BlueIguana Cantina, and the candy shop onboard known as Cherry on Top.

The waterpark additions were badly needed in my opinion, and Fantasy Class ships have a ton of extra space for the improvements.   So far it looks like the kids are loving the new changes.

Adding Guy’s Burger Joint and BlueIguana Cantina not only served the purpose of giving cruisers more options for dining, but they also help make the main buffet less crowded.  And a less crowded buffet means a much happier passenger.

This morning I found that the Guy’s Burger Joint station is used to serve up amazing made-to-order omelets for breakfast too.  The line went very quickly, and inside the buffet there is another omelet station.

Of course, you can get a wonderful breakfast burrito from BlueIguana Cantina right next door, all without ever having to enter the buffet.

There is a drink station between these two eateries with water, coffee, and juice available.  There was even a hot chocolate machine, which came in pretty handy with these cool 50-degree mornings we have had so far.

By the way, behind the buffet there is extra seating outside.  These areas are often quiet and offer great aft views.  This is one of my favorite places to eat or sip my morning coffee. 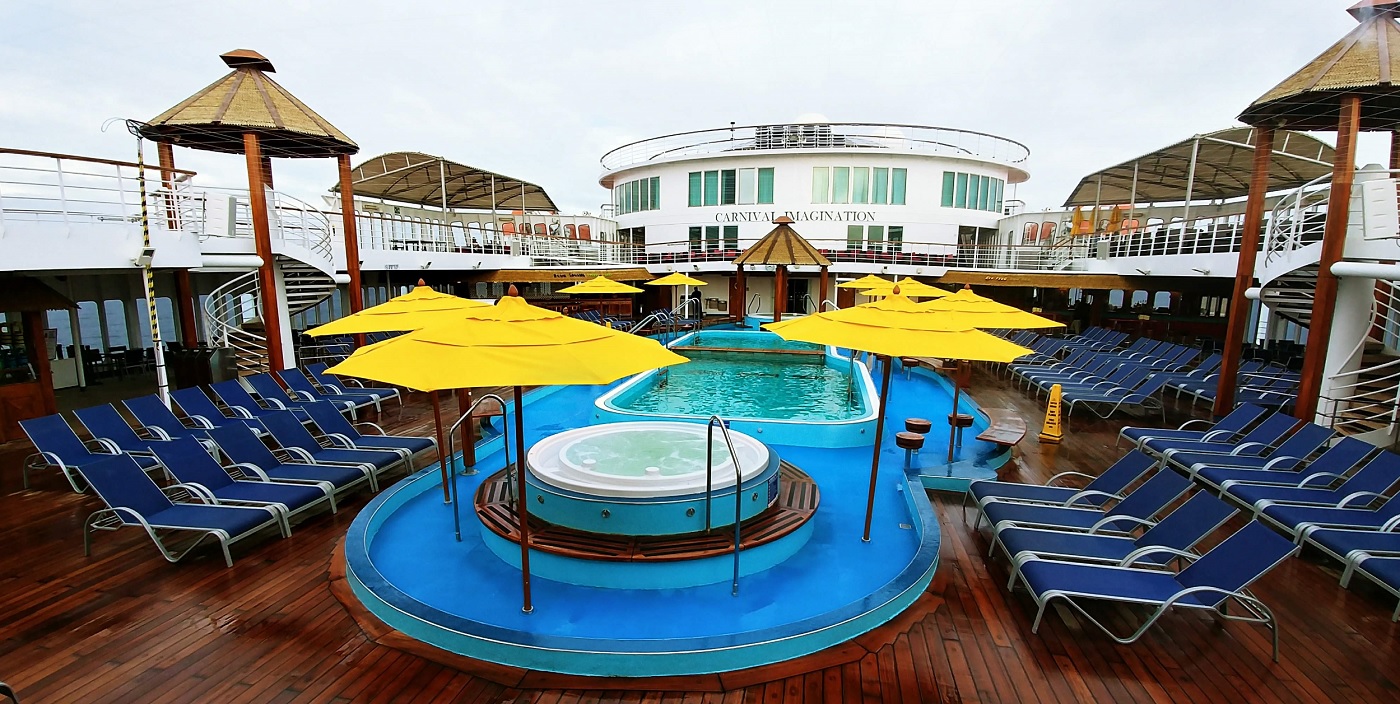 One of the first things I noticed on the pool deck was the sort of net that covered it.  String has been tied over the top of the main pool deck in a sort of checkered pattern.  I assume this is to keep the seagulls and other airborne wild life away from the food and passengers, and so far it has worked great.  I haven’t seen any seagulls around any food areas, even though I see them flying overhead as they follow the ship.

The main pool has a divider in the middle and there is a hot tub on either side of it.  There seem to be ample loungers as well.  Today is a sea day and I still see plenty of places for people to lounge either on the pool deck or one deck above.

It’s only 60 degrees right now so most people are using the hot tubs instead of daring to jump into the cool water of the pool.

Right above the pool deck is a ping-pong table, large chess mat, and a canopy-covered smokers area.

You could probably see some great views on this deck, but you will notice that the lifeboats tend to block most of them.  So, if you want to just admire the ocean views you will want to move aft or forward and there are plenty of areas to soak in the scenery.

If you go forward you will find the mini-golf course and you can keep walking forward to see some great areas to check out the bow of the ship.

The adult only Serenity lounge is not very big on Carnival Imagination but it delivers on its name.  It’s a quiet place away from the bustle of the rest of the ship.  There are two hot tubs in Serenity and there are padded loungers that face the aforementioned aft view.

The Gym and Spa

I always like to check out the gym on any cruise ship I’m on.  Sometimes I plan on using it every day and only enter that space once, but hey, it’s the thought that counts, right?

I found the gym on this Fantasy Class ship to be well laid out.  The machines and equipment were up-to-date and in great shape.  The space can get a little crammed, however.  Again, this is a sea day, but this morning the place was hopping.  I still found a few machines to use that were not being utilized, but some areas of the gym felt over-crowded.  I had to step over a few people just to get a towel.  But still, I got a good work-out and on a sea day, that’s not always an easy thing to do.

I love that Carnival Imagination has a free-to-use dry sauna and steam room.  These areas are both in the men’s and women’s locker rooms right before the gym. 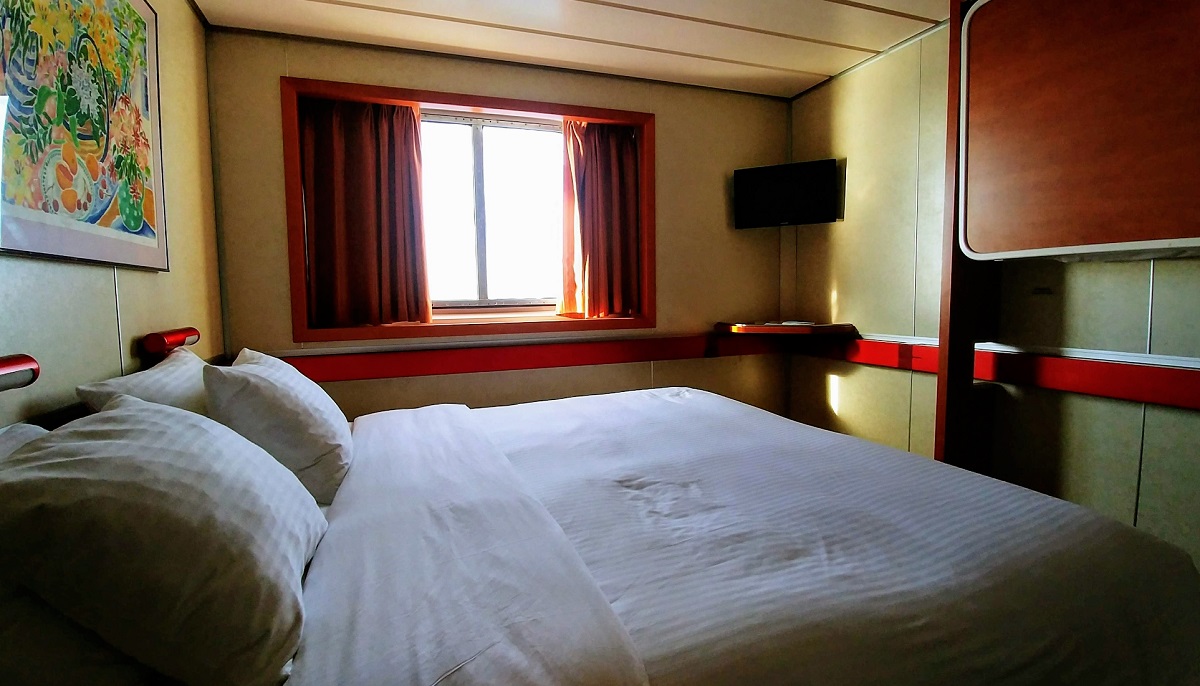 I have an ocean view stateroom on deck 5 and it’s a good size cabin.  The mirror is huge and has a light on either side of it.  There is only one outlet at the desk, but there is another in the bathroom that you can use for an electric shaver.

There is plenty of closet space, but I’m a guy and I don’t pack very much at all.  Still, you should find the storage space more than sufficient.

There is a tiny TV in the corner of the room.  It’s about the size of a small computer monitor, but who stays in their stateroom and watches TV all day anyway?

I found there is a vent above the bed that has a control dial that can turn the air flow up or down.  I don’t know how much difference it really makes but it makes a nice “white noise” sound that was great for sleeping.

My Thoughts on Carnival Imagination So Far

I’m enjoying this Carnival class more than I thought I would.  There is a certain amount of charm in a vessel like this, and the recent refurbishments have enhanced the experience.

The crew has been friendly, courteous, and helpful.  The food has been spot-on.  And the ship itself offers more than you would think a 70,000 ton vessel could.

I have not seen any shows in the theater yet, but I like the layout of the theater.  The lower portion offers comfortable seating and plenty of leg-room.  You don’t have to stumble over someone’s feet to grab a seat in the middle of a row.

I’m still working on navigation of this ship.  Once in a while I run into a dead-end and have to go up or down a few decks to get to where I want to go, but I’m getting the hang of it.

The atrium is not only a center of live-music and activity, but there are also a lot of doors and access points to the outer decks from the atrium.  About every time I walk through that area I find another door or access point I didn’t notice before.

For a quick getaway Carnival Imagination offers the perfect weekend vacation.  It doesn’t even really have to be a vacation.  It can just be a I-need-to-not-cook-and-do-laundry-for-a-few-days kind of thing.

I will be working on putting together a video tour of this ship which I will embed on this page when it is finished.

J. Souza
Jon got hooked on cruising after his first cruise on his honeymoon, and today he is always looking for cruise deals and reading information about the cruise industry. Jon lives in the foothills of North Carolina and wishes there were a cruise port that far inland. Jon can be reached at [email protected]
ShipsCarnivalCarnival Imagination: I'm Finally Sailing on a Fantasy Class Ship
Previous article
Best Theaters on Cruise Ships
Next article
Cruise Line’s Newest Epic Cruise Will Visit 75 Cruise Ports on Six Continents