Carnival Cruise Line has announced that Kelly Arison will serve as the godmother for Carnival Sunrise.  Carnival Triumph is currently in the middle of a massive $200 million transformation that will turn the ship into Carnival Sunrise.

When the transformation is complete, a naming ceremony will be held in New York City on May 23, 2019 where Kelly Arison will serve in the godmother role. Kelly is the daughter of Carnival Corporation Chairman Micky Arison and his wife Madeleine. Madeleine served as godmother of Carnival Triumph when the ship originally debuted back in 1999. 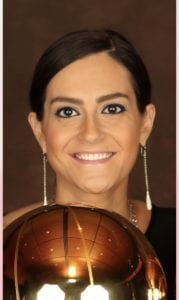 Carnival Sunrise’s naming ceremony will take place aboard the ship at the Manhattan Cruise Passenger Terminal and will serve as a platform to heighten awareness of the work of the Ehlers-Danlos Society, an organization dedicated to serving those with joint hypermobility spectrum disorders, of which Kelly is a strong advocate. Carnival Cruise Line will be making a donation to the Ehlers-Danlos Society during the ceremony.

Carnival Sunrise’s inaugural season includes four- to 14-day voyages from Norfolk, Va., and New York to Bermuda, Canada and the Caribbean through September. The ship will then reposition to Fort Lauderdale for a winter season of Caribbean and Bahamian voyages beginning in October 2019 before heading back to New York in spring 2020.

Guests sailing aboard Carnival Sunrise will enjoy a wide range of entertainment options, along with open-air attractions like a new WaterWorks aqua park and SportSquare featuring a suspended ropes course.

All of the ship’s staterooms have been updated with island-inspired interiors featuring bright colors and soothing pastels inspired by the line’s Caribbean itineraries, along with new choices such as luxurious Captain’s Suites adjacent to the navigational bridge offering floor-to-ceiling windows and extended balcony grand suites.