JohnHealdsBlog.com was voted the best cruise blog in the 2014 Cruise Fever Fan Awards capturing over 70% of the total votes. Who is John Heald? He is by far the most well known cruise director at sea. 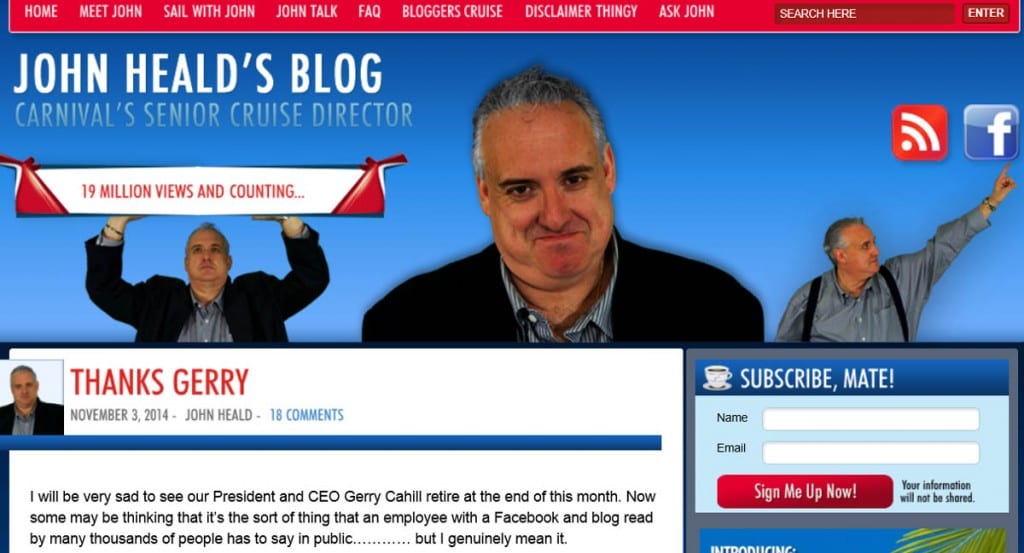 John Heald is the senior cruise director for Carnival Cruise Lines and also runs an extremely popular Facebook page in addition to his blog.  He started the blog back in 2007 on the first sailing of the Carnival Freedom and has since had over 19,000,000 page views.

Because of John’s unique sense of humor and engaging personality, he is able to connect with cruisers like no one else can. While he hasn’t blogged with regular frequency since September, he posts several times a day on this Facebook page usually asking questions to get the opinion of cruisers.  He also likes to post odd questions that he is asked that tend to be rather amusing.

CruiseMiss.com, a cruise blog by Danielle Fear, finished a distant second in voting. Rounding out the top 3 was Chris Owen at ChrisCruises.com.

Voting took place on CruiseFever.net throughout 2014 and each household was allowed one vote (Multiple votes from the same IP address were discarded).  Thousands of votes were cast in the 2014 Cruise Fever Fan Awards as Cruise Fever saw a record number of votes for this year’s awards.

About Cruise Fever:  CruiseFever.net provides cruise news, tips, and reviews to help cruisers make the most of their cruise vacations.  Even though they were founded in 2011, their website receives over one million visitors a year.  They have an active Facebook page with over 55,000 fans, making them one of the most popular cruise fan pages on the social media site

Ben Souza
Ben is a world traveler who has visited 42 countries and taken over 50 cruises. His writings have appeared and been cited in various media outlets such as Yahoo News, MSN, NPR, Drudge Report, CNN, Fox, and ABC News. Ben currently resides in Cincinnati, Ohio. Follow Ben on Instagram. Visit Ben Souza on Linkedin. You may email Ben at [email protected]
Cruise News John Heald's Blog Voted Best Cruise Blog in 2014
Previous articleBest Dream Cruises If Money Was No Object
Next articleNorwegian Escape To Feature The Largest Waterpark At Sea