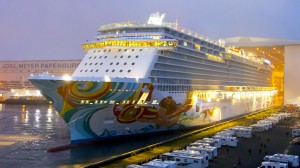 Norwegian Cruise Line’s Freestyle cruisers have been patiently waiting for the Getaway ever since the popular Breakaway began sailing earlier this year.  That wait will soon be over when Norwegian’s newest and most technologically advanced cruise ship begins sailing week long cruises to the Eastern Caribbean in February, 2014.

The Getaway floated in water for the first time this past week when the ship was “floated out” of the covered dry dock at the Meyer Werft shipyard in Germany.  While major construction has been completed, there is still lots of work to do on the ship’s interior.

Before the Getaway cruises to the Caribbean, the ship will first play host as a floating hotel in New York City for Super Bowl XLVIII.   The cruise ship will become the “Bud Light Hotel” creating a massive space and entertainment venue.  The ship will be docked next to the Intrepid Sea, Air & Space Museum and will serve as a hotel from January 30 until the day after the Super Bowl (February 3).

The area will host concerts, corporate business meetings, and other events.  Anheuser-Busch plans on decking out the Breakaway with logos on pillows, towels, shampoo bottles, and other items on the Getaway.  AnneMarie Mathews, a spokesman for Norwegian Cruise Line, said “We are honored and proud that one of our world-class ships will be the center of Bud Light’s Super Bowl event.”

During this Super Bowl event on February 2, the Breakaway and Getaway will be in port together for the first time.  This is the only time the two cruise ships are scheduled to be in the same port in the next 18 months. (Cruise lines have not yet released full ship schedules past April 2015.)

The Getaway, along with the Breakaway, are part of Norwegian’s Project Breakaway.  These two 4,000 passenger, 146,000 gross ton ships are among the ten largest cruise ships in the world.  However, they will fall out of the top ten within the next few years.  Norwegian has announced that they are building two Breakaway Plus ships at 163,000 tons and Royal Caribbean’s Sunshine Class (Quantum of the Seas) will come in at 168,000 gross tons.

Cruise Fever will continue to provide updates on the construction of the Norwegian Getaway as the ship is in its final stages of completion.