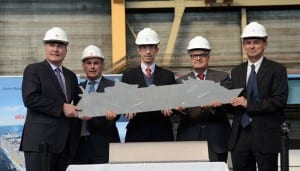 There is good news for cruisers who are fans of the Oasis Class cruise ships.  Royal Caribbean has cut the first piece of steel for the 3rd Oasis Class vessel.

This soon to be named ship will be slightly larger the Oasis and Allure of the Seas and come in at 227,000 gross tons, making it the largest cruise ship in the world.  (The Oasis and Allure are 225,282 gross tons)  In comparison, the Titanic was only 56,000 gross tons. The ship is being built at the STX France Shipyard in Saint Nazarre and is scheduled to be completed in 2016.

Royal Caribbean has been quiet about what special features this 3rd Oasis Class ship will have. However, we do know that the ship will have 16 passenger decks and 2,700 cabins (approx. 6,000 passengers)

RCI also has an option to build a 4th Oasis Class ship that can be completed in 2018, but has yet to exercise that option.

Royal Caribbean has promised that they will release details in the coming months about this 3rd Oasis Class ship.

Cruise Fever would love to hear your opinions on this new 227,000 gross ton ship.  Do you prefer the new mega-ships that are being built or do you like the smaller, more intimate ships?