A Princess Tours passenger bus rolled over on the Parks Highway on Friday killing 1 Princess Cruise employee and injuring 2 others.  The three were the only ones on the bus at the time of the accident according to Alaskan State Troopers. 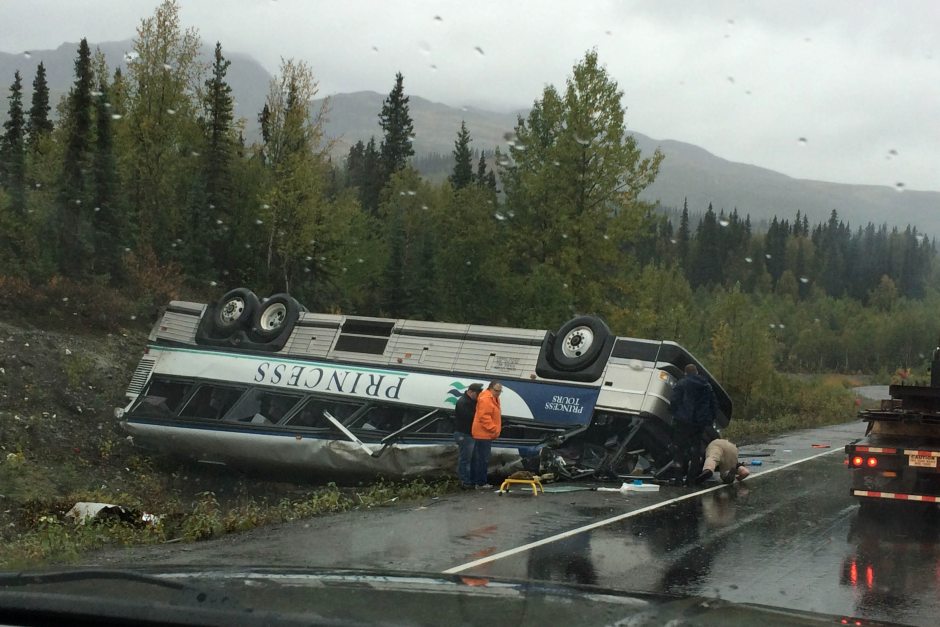 The accident happened at Mile 173 near Hurricane Gulch.  The driver of the bus has been identified as 25 year old Brian Lanning of Trapper Creek and his injuries are not considered life threatening.  The name of the passenger killed in the crash has not yet been identified except that she was a worker from Malaysia.

The accident happened approximately 200 miles south of Fairbanks, Alaska. State Troopers cited speed as a factor in the crash.

Julie Benson, a spokesman for the Princess Cruises gave the following statement:

“Earlier this morning a Princess motor coach was involved in a single vehicle accident on the Parks Highway. Two employees of the Mt. McKinley Princess Wilderness Lodge, in addition to the driver, were the only passengers onboard the motor coach. It is with great sadness that we confirm there was a fatality and that we have lost one of our colleagues in the accident. The other two occupants sustained injuries and are en route to the hospital. We have activated our CARE Team and will work with the families of our employees to ensure we do all possible to provide assistance during this very difficult time.”

Cruise Fever sends out our condolences to the family of the passenger who died in the accident.

Ben Souza
Ben is a world traveler who has visited 42 countries and taken over 50 cruises. His writings have appeared and been cited in various media outlets such as Yahoo News, MSN, NPR, Drudge Report, CNN, Fox, and ABC News. Ben currently resides in Cincinnati, Ohio. Follow Ben on Instagram. Visit Ben Souza on Linkedin. You may email Ben at [email protected]
Cruise News Cruise Line Bus Crash in Alaska Leaves 1 Dead
Previous articleVideo: Bionic Bar on the Quantum of the Seas
Next articleRidiculous Cruise Deals Being Offered By Cruise Lines