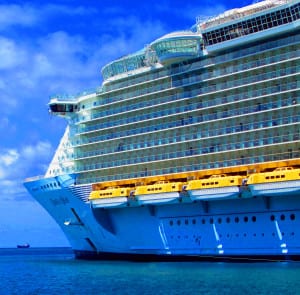 Less than a month after Disney joined several other cruise lines in banning passengers from smoking on balcony cabins, Royal Caribbean becomes the latest cruise line to adapt the policy.

The ban will go into affect on January 1, 2014 and will apply to every Royal Caribbean cruise ship except for the ships that are based in Asia.  Smoking in stateroom cabins was already not allowed on any RCCL ships.

Royal Caribbean released the following statement, “After careful consideration and review of guest feedback, Royal Caribbean International has adjusted its smoking policy on its fleet of 21 ships. Effective January 1, 2014, all indoor public spaces will be smoke-free on all ships with the exception of those sailing in Asia. Smoking will not be permitted in any interior space, including but not limited to restaurants, theater, bars, lounges, corridors, elevators, staterooms and stateroom balconies.”

Guests who break this new policy will be forced to pay a $250 fine.  Smoking will still be allowed in the casino, Connoisseur Club, and on the starboard side of outside decks.

All but two of the major cruise lines have now adopted the policy of banned smoking on balconies.   Carnival Cruise Line and Norwegian Cruise Line still allow guests to smoke on balconies, but not in staterooms.  However, based on the current trend in the cruise industry,  it is likely that they will soon join the other cruise lines and outlaw it.

To see what cruise lines allow smoking and in which parts of the ship that they allow it, visit our Cruisers Guide to Smoking page.

We would love to hear what you think the rules should be on smoking on cruise ships.  Leave a comment in the comment section below with your thoughts an opinions.