Costa Concordia Set To Be Raised in September 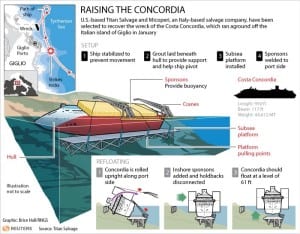 The Costa Concordia has been laying half submerged off the coast of Italy since the cruise ship hit a reef 19 months ago killing 32 passengers and crew members.  The reef ripped a 150 foot hole in the side of the ship’s hull.  Work is now in the final stages before workers can begin to raise the Concordia .

Over 500 workers have been working day and night over the past year to remove the cruise ship and take the vessel to a scrapyard.  The work is being overseen by Florida based Titan Salvage at a cost of over $400 million.  This will be the largest cruise ship ever attempted for a salvage.

Sometime in September, workers will finally attempt to raise the ship in a risky and unprecedented operation.   A process called parbuckling will rotate the ship upright onto a platform.  Once the ship is on the platform, water will be pumped from out of the ship raising it so it can be re-floated and towed to a salvage yard.

Once the ship has been raised, workers are also hoping to recover the bodies of two passengers whose bodies have yet to be retrieved from the wreckage.   Personal items in safety boxes in the cabins will also be returned to their legitimate owners.

However, for the safety of the workers, the towing will not occur until winter has passed.  After the ship is removed, work will begin on repairing the reef and the pristine waters/marine life off the shore of Giglio.  The island is part of the largest protected marine area in the Mediterranean and part of Tuscan Archipelago National Park.

Tourism on the island has slowly begun to recover from this incident.  Although tourist numbers are down 15% this season compared to before the wreck, it is an improvement from last year when tourism dropped by 30%.

Charges were filed against the ship’s captain, Francesco Schettino, and five crew members for their roles in the accident.  The five staff members received short prison sentences in July and Schettino’s trial is set for late September on charges of manslaughter and abandoning ship.  He faces up to 20 years in prison if convicted.

Cruise Fever will continue to monitor the Parbuckling project of the Costa Concordia and will have all updates as the project moves forward.