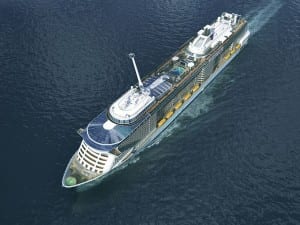 Royal Caribbean is bringing a new concept of dining with the Quantum Class cruise ships.  They are calling it “Dynamic Dining” and it will be similar to Norwegian’s popular Freestyle Dining.

The biggest changes that the “Dynamic Dining” will bring is that there will be no main dining rooms on the Quantum or Anthem of the Seas.  There will also be no formal nights and no set dinner times.  Passengers will be able to make reservations online before their cruise or after they have boarded the ship.

There will be 5 unique, full service complimentary (included in your cruise fare) restaurants and 13 additional eateries that will have a surcharge.  Out of the 5 complimentary restaurants, the 128 seat Mediterranean/California Coastal Kitchen will be for suite guests only.

The American Icon Grill will serve comfort food. The Chic will feature a contemporary menu that focuses on proteins. The other two restaurants that will be included with your cruise fare will be Pan-Asian and The Grande.  The Grande will require formal attire if you wish to dine there. All of these restaurants will seat over 400 passengers.

The specialty restaurants onboard will showcase several celebrity chefs.  Jamie Oliver, a British celebrity chef, will feature his first eatery at sea called Jamie’s Italian.  For those who are looking for healthy cuisine, there will be the Devinly Decadence At Solarium Bistro.  Devin Alexander of “The Biggest Loser” will serve foods that will have less than 500 calories each.

One of the most interesting new venues will be Wonderland. Royal Caribbean describes it as a “dreamscape of never before seen fare”.

There will also be a Chops Grille Steakhouse, Izumi Japanese Cuisine, and the Chef’s Table. Rounding out the “for fee” restaurants will be a Johnny Rockets, SeaPlex Dog House, and Sorrento’s.  The cruise line has yet to announce the fees for the specialty restaurants.

For passengers looking for a more laid back meal, the Windjammer Marketplace Lido Buffet will have interactive stations that will serve a variety of food with a global food focus.

For those who are booked on the Quantum of the Seas, you can begin making reservations on May 15 via an online planning tool.

The Quantum of the Seas will begin sailing from Bayonne, New Jersey in November 2014.  The Anthem will sail from Southampton, U.K starting in 2015.

Both of these ships will be 167,000 gross tons and will carry up to 4,900 passengers.  They will be the second largest class of cruise ships in the world behind the Oasis Class ships.