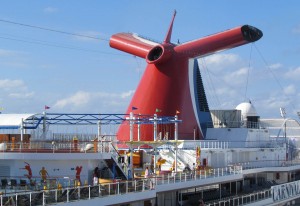 Update March 25, 7:30 p.m.: The Carnival Magic was able to leave port today and will sail a 5 night cruise to the Western Caribbean with stops in Grand Cayman and Cozumel.  Visit Carnival.com for complete details.

The Carnival Triumph is still in port.  The ship will not depart until the hull has been cleaned and the Coast Guard clears the ship.  The ship is expected to set sail later today.

Royal Caribbean’s Navigator of the Seas cruise was originally cancelled but the cruise line will now go ahead with the cruise.  All passengers will receive a full refund and the ship will set sail on Wednesday morning.  Guests who disembarked the ship will be allowed to get back on.  Passengers will also receive a 25% credit towards a future cruise.

The Caribbean Princess was able to leave port and all passengers will receive a full refund and a 25% credit towards a future cruise.  Visit Princess.com for more details.

Original Article: The Carnival Magic was delayed at sea after the Houston Ship Channel had to close due to an oil spill in the Galveston Bay.  The spill happened after a fuel barge collided with a cargo ship.

The barge was holding an estimated 168,000 gallons of fuel oil at the time of the collision and it is not known how much of the oil spilled out into the bay.  The Houston Ship Channel has remained closed as four skimming boats work to clean up the spill.

The Carnival Magic was scheduled to arrive back in Houston on Sunday morning after a 7 night cruise to the Western Caribbean that stopped in the ports of Roatan, Honduras; Belize City, Belize; and Cozumel, Mexico.  The ship finally was allowed to return to port 12 hours later than scheduled.

A Carnival spokesman said that the cruise ship had plenty of supplies for the extra time the ship was at sea.

Passengers who were scheduled to embark on the Magic today will sail a shortened itinerary.  Guests will likely receive some form of refund for the lost days.

The channel is not expected to open until Monday, possibly Tuesday.  Another Carnival ship, the Carnival Triumph, is scheduled to arrive in Galveston on Monday morning.

The cleanup effort is being aided by over 20 vessels and floating barriers were laid down to help contain the spill.

Cruise Fever will continue to monitor this breaking story and will update this page as more information becomes available.