MSC Cruises has confirmed an order for four additional cruise ships, including their largest cruise ships to date. All four ships will be built at STX France. 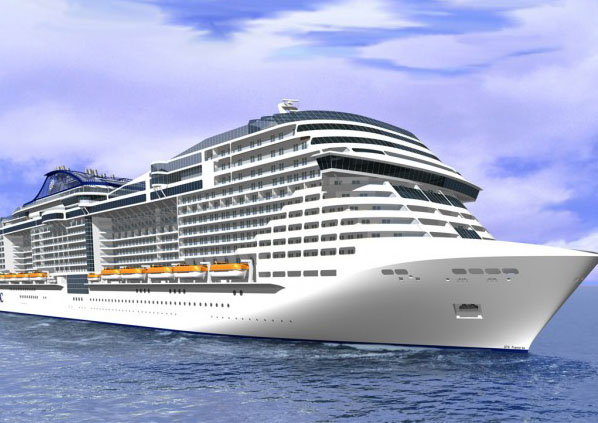 Two of the four cruise ships will be Meraviglia-Plus class ships, the largest cruise ships on order for MSC Cruises.  At 177,000 gross tons, the ships will hold 4,888 passengers at double occupancy in the 2,444 staterooms that will be on board.  The ships are scheduled to be delivered in late 2019 and in early 2020.

The other two cruise ships were an option as part of the original Meraviglia order.  There will now be four Meraviglia class ships with the first one, MSC Meraviglia, debuting next year.  At 167,600 gross tons, the ship will have a passenger capacity of 4,500 and will sail to the Mediterranean.

MSC Cruises, the 4th largest cruise line, now has seven cruise ships on order with two of those vessels (MSC Meraviglia and MSC Seaside) currently under construction.  MSC is one of the fastest growing cruise lines in the world and is also the world’s largest privately owned cruise line.