Viking Cruises has announced that they have signed on as presenting sponsor of Downton Abbey: The Exhibition, which will make its North American debut in New York City, giving guests a chance to experience an up-close and personal look at the history, fashion and culture of post-Edwardian England – as well as the iconic country home – that were featured in the Emmy Award-winning series. 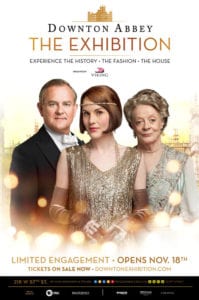 Viking became a household name with its sponsorship of the celebrated series MASTERPIECE during the years Downton Abbey aired on PBS, and this new partnership builds on the company’s continued commitment to enriching cultural programming. Viking’s current and past partnerships include Highclere Castle, the real Downton Abbey; National Geographic and its first fully scripted global anthology series, “Genius;” the Los Angeles Philharmonic at The Hollywood Bowl; The Metropolitan Opera; the BBC; Oslo’s the Munch Museum; St. Petersburg’s Mariinsky Theatre; and others. The limited engagement exhibition opens in Manhattan on November 18 and will run through April 9, 2018.

Richard Marnell, Senior Vice President of Marketing for Viking, gave the following statement about this sponsorship: “Our guests are curious explorers who enjoy being immersed in the cultures of the world, and many of them first learned about Viking and our destination-focused small ship cruises while watching Downton Abbey. We are pleased to partner with this enriching new exhibition as a natural extension of our longstanding relationship with MASTERPIECE, Highclere Castle and the Carnarvon family.”

Viking, a national sponsor of MASTERPIECE since 2011, also offers its guests a Privileged Access experience at Highclere Castle, the setting of the popular series. The Oxford & Highclere Castle pre- or post- trip extension is available for guests on select river and ocean cruise itineraries. The Privileged Access extension was co-created by Karine Hagen, Viking’s Senior Vice President, with her dear friends and owners of the iconic home, the Earl and Countess of Carnarvon.

The extension provides guests with an exclusive three-day experience in the rolling hills of England’s countryside with a champagne welcome and tours of the estate. Speaking about the Oxford & Highclere Castle extension, Lady Carnarvon said, “Through my long friendship with Karine, I am delighted to welcome Viking guests here for special tours, and I hope to meet many more of them in the future.”

Created by NBCUniversal International Studios, Downton Abbey: The Exhibition is the first-ever fully immersive experience set inside the world of the multi award-winning global television phenomenon. Visitors will be transported on an incredible journey through the grand home of Downton Abbey as the exhibition peers into the world of the Crawleys and those that served them below stairs. From Mrs. Patmore’s hectic kitchen and the gossip-fueled servants’ quarters, to the family’s glamorous dining room and Lady Mary’s bedroom, fans will get the chance to walk through some of the series’ most recognizable and beloved sets and more than 50 of the show’s official costumes worn by their favorite actors.

The highly-anticipated multi-city tour will open its doors at 218 W 57th Street (between Broadway and 7th Ave) in New York City for a limited engagement before traveling throughout the U.S. Tickets are available to purchase at www.downtonexhibition.com. The exhibition will open daily between 10am and 8pm, including on holidays. VIP packages and private hire options are also available. Additional U.S. locations will be announced at a later date.

Fans of Downton Abbey also have an opportunity to experience Highclere Castle in their own homes by purchasing “At Home at Highclere: Entertaining at the Real Downton Abbey,” available on Amazon here. In her newest book about the history of her husband’s ancestral home, Lady Fiona Carnarvon invites readers inside Highclere Castle and shares family recipes and stories, while also describing how to entertain in the style of a stately English country house: from the etiquette of the invitation and proper attire, to correct seating arrangements and table-setting.