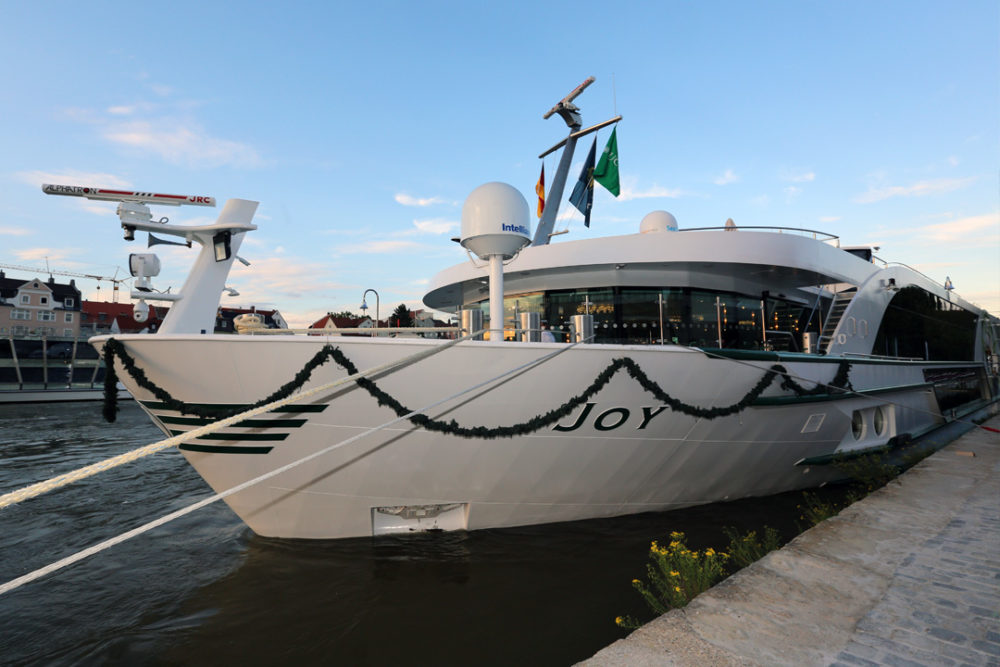 With fewer crowds and mild spring temperatures, Tauck’s April and May departures include a choice of eight to 15-day itineraries that explore 10 different countries while plying the Danube, Rhine, or Seine rivers.

Guests on day five of Tauck’s “The Blue Danube” itinerary will be presented with two full-day excursion choices to two different countries; Salzburg, Austria or Cesky Krumlov in the Czech Republic. And on the new “Rhine Enchantment” itinerary, the choice is between a visit and wine tasting in Riquewihr (one of “The Most Beautiful Villages in France”) or a guided bicycle ride in the Black Forest.

The excursion in the Black Forest is one of several organized cycling opportunities that Tauck has added to various cruises, along with new hiking opportunities and onboard yoga-inspired stretching classes that appeal to active guests. Other enhancements to Tauck itineraries include exclusive pre-opening visits to Versailles and after-hours tours of the Louvre, a private Tauck dinner inside the German Parliament building, and an included lunch at Alain Ducasse’s newest restaurant, Ore.

Highlights of April and May European voyages include:

On The Danube Reflections guests spend two nights exploring fairytale-like Prague. The 12-day itinerary offers a choice of Munich or Regensburg excursions, cruising through the Wachau Valley famous for its Reislings and Grüner Veltliners, and in Vienna, a Tauck-exclusive gala evening of champagne, dinner and music at a private palace. Prices for the April 19 departure start at $5,840 per person, plus airfare.

The 12-day Blue Danube itinerary begins with a Tauck-exclusive royal welcome reception, tour and dinner at the 16th-century Lobkowicz Palace at Prague Castle. In Linz guests can choose to tour the city on their own, explore Mozart’s Salzburg or tour medieval Cesky Krumlov, a UNESCO World Heritage Site, in the Czech Republic. A wine tasting in Dürnstein, a performance of the famed Lipizzaner horses in Vienna, and two nights each in Budapest and Prague are just some highlights. Prices for the April 5 departure start at $5,840 per person, plus airfare.

An in-depth introduction to Western and Central Europe, Tauck’s 15-day Amsterdam to Budapest by Riverboat explores five countries and cities such as Amsterdam, Vienna, Köln, Nürnberg, Bratislava, and Budapest. In Vienna, guests can choose to tour Schönbrunn Palace or the Sisi Museum at the Hofburg, and afterwards attend a grand Imperial Evening in a traditional palace. Prices for the May 19 departure start at $7,290 per person, plus airfare.

Highlights on the eight-day Romantic Rhine: Basel to Amsterdam river cruise include visits to the Netherlands, Germany, France and Switzerland. From Lucerne adventurous travelers can choose to ride on the world’s steepest cogwheel train to the heights of Mt. Pilatus – nearly 7,000 ft. high. Alternatively, guests can have lunch and a wine tasting along the Alsatian wine route at Château Haut-Koenigsbourg, originally built in the 1200s. Prices for the May 6 departure start at $4,890 per person, plus airfare.

The Rhine and Moselle is a 13 day journey through Switzerland, Germany, France, Luxembourg, and the Netherlands. Active travelers can explore the De Hoge Veluwe National Park on a bicycle excursion while others may opt for a guided visit to the Kröller-Müller Museum. Strasbourg, the thermal waters of Baden-Baden, the 1,000-year-old Reichsburg Castle, and an exclusive dinner at a castle in Germany are featured. Prices for the April 17 departure start at $5,940 per person, plus airfare.

The April 10 departure of The Rhine, Swiss Alps and Amsterdam 10-day journey begins in Amsterdam and visits Lucerne, Basel, Colmar, Stuttgart, Rudesheim, and Cologne, among other cities and towns along the Rhine. Choice excursions on this itinerary are either a scenic cogwheel train ride to Jungfraujoch, the highest railway station in Europe, or, a walking tour of the medieval yet modern city of Bern. Prices for the April 10 departure start at $6,740 per person, plus airfare.

Guests on Tauck’s 14-day Cruising the Seine, plus Versailles, Paris and London can choose visits to a variety of famed Parisian institutions such as the Musée National de l’Orangerie, Musée Rodin, or the Musée d’Orsay. Also included are an exclusive early-opening tour of Versailles, the D-Day invasion beaches of Normandy, a walk in Monet’s garden at Giverny during private pre-open access, a visit to Van Gogh’s muse in Auvers-sur-Oise, and a presentation by Sir Winston Churchill’s granddaughter, Celia Sandys, in London. Prices for the April 19 itinerary start at $7,540 per person, plus airfare.