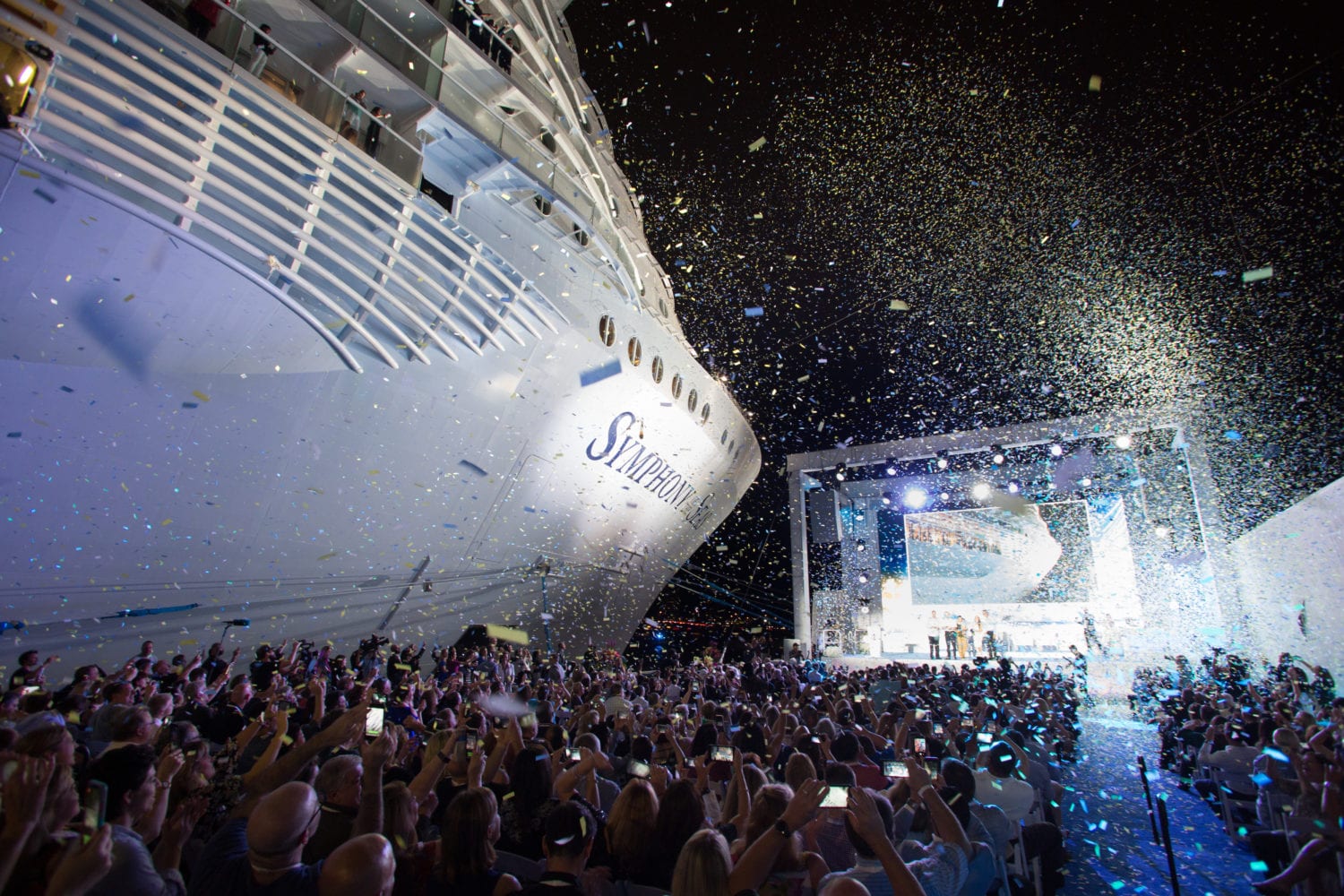 Symphony of the Seas was named by Royal Caribbean’s first-ever Godfamily, actors Alexa and Carlos PenaVega, who along with 23-month-old son Ocean, were on hand to christen the ship and bestow a blessing of safekeeping over her crew and guests. Having celebrated many happy occasions onboard the cruise line’s Oasis Class ships, the naming ceremony marks the avid Royal Caribbean fans’ biggest adventure yet with the cruise line.

With almost 1,000 guests in attendance, Symphony of the Seas was christened while dockside at the cruise line’s new state-of-the-art Terminal A at PortMiami, making for the largest naming ceremony in Royal Caribbean’s history. The customary event was infused with modern day elements – ranging from an electronic violinist who serenaded the crowd throughout the ceremony, to a stunning sail away performance by nearly 400 choreographed drones – and also incorporated a number of local Miami touches.

Florida International University’s Marching Band kicked off the celebration, while students from Miami Southridge Senior High headlined the occasion on stage with a rousing drumline performance. Through Royal Caribbean’s partnership with the GRAMMY® Museum, Miami Southridge Senior High was one of 20 high schools within the Miami-Dade County Public School District that received a Royal Caribbean-funded grant through the GRAMMY Museum® Signature Schools program, which supports music education programs in underserved high schools.

Joining sister ship Allure of the Seas at Royal Caribbean’s state-of-the-art Terminal A, Symphony will sail 7-night Eastern and Western Caribbean with featured visits to Perfect Day at CocoCay, the global cruise line’s newly revealed private destination in The Bahamas. The 170,000-square-foot Terminal A, nicknamed the ‘Crown of Miami,’ is the most innovative cruise facility in the U.S. with an expected $500 million in revenue and addition of 4,000 jobs to Miami-Dade County. It is anticipated that Royal Caribbean will welcome at least 1.8 million guests at PortMiami, representing no less than 30 percent of the port’s projected traveler traffic.

Symphony brings to life every family’s vacation dreams with a bold lineup of energy-filled, heart-pumping experiences. The new ship offers the chance to go head-to-head in a glow-in-the-dark laser tag adventure, take the plunge down the Ultimate Abyss – the tallest slide at sea towering 10 stories high – or soak up some sun after getting drenched on epic waterslides and FlowRider surf simulators.

After a day at play, families can dine at a variety of venues that will keep taste buds tingling, including Hooked Seafood, Playmakers Sports Bar & Arcade and El Loco Fresh for Mexican street-food fare, all before picking up the sweetest of treats at Sugar Beach.

Adding to the excitement is the Ultimate Family Suite, a one-of-a-kind, two-story home away from home designed for both the young and young at heart, where families can enjoy a signature in-suite slide, private cinema, building block wall, Luckey Climber vertical maze for kids and whirlpool, among other premium services and amenities.