Carnival Cruise Line named Carnival Sunrise this past week during a ceremony that took place in New York City. The cruise ship was transformed from Carnival Triumph into Carnival Sunrise during a $200 million renovation earlier this year.

Carnival Sunrise was officially named on Thursday by godmother Kelly Arison – daughter of Carnival Corporation & plc Chairman Micky Arison and his wife Madeleine – in an elegant and memorable ceremony at the Manhattan Cruise Terminal in New York City.

As a Carnival godmother, Kelly Arison carries on a family tradition – her mother, Madeleine was godmother to the ship when it first entered service in 1999, and her grandmother Lin Arison served as godmother to Carnival Sunrise’s sister ship, Carnival Sunshine, in 2013. 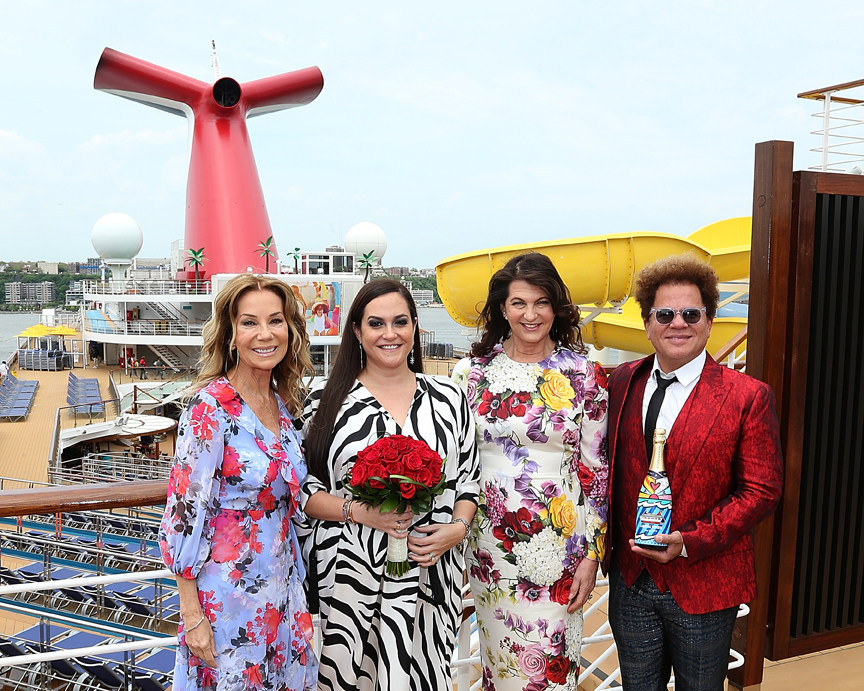 Smaller versions of the bottle will be sold onboard with proceeds benefiting the Ehlers-Danlos Society (EDS), an organization dedicated to serving those with joint hypermobility spectrum disorders, of which Arison is a strong advocate. Carnival also made a donation to the organization as part of the naming festivities.

Kathie Lee Gifford, who has had a longstanding 35-year relationship with Carnival Cruise Line, took a moment to address the crowd and extend her best wishes to Arison as godmother, a role that Gifford served for two Carnival cruise ships, Celebration in 1987 and Ecstasy in 1991.

The event included a video featuring players from the Miami Heat, of which Micky Arison is a managing general partner. In the video, Dwyane Wade and Alonzo Mourning, as well as former Miami Heat player and Carnival’s Chief Fun Officer Shaquille O’Neal, congratulated Arison.