Viking Ocean Cruises announced that their fourth ocean cruise ship, Viking Sun, touched water for the first time during the ship’s floating out ceremony at the Fincantieri Shipyard in Italy. 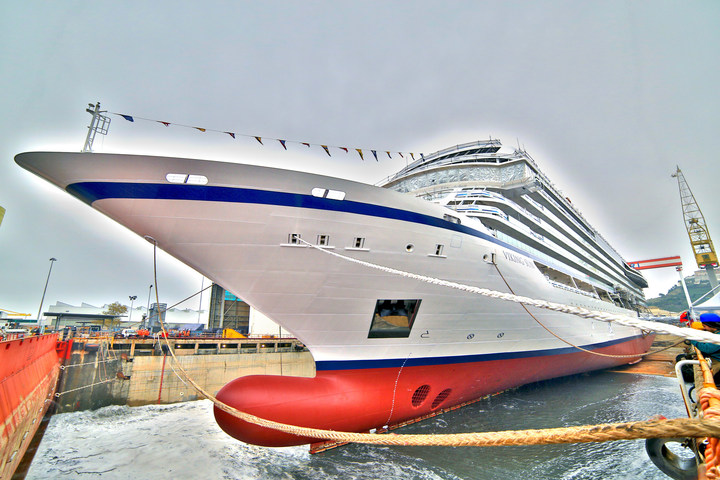 A float out ceremony is significant because it denotes a ship moving into its final stage of construction. Viking Sun’s float out began at approximately 10:30 a.m. local time, and in keeping with maritime tradition, a madrina – a special woman of honor – assisted with the ceremony, first welding coins under the ship mast.

Commemorative coins were welded onto the ship by Mrs. Yi Lou, Vice President of China Merchant Bank Financial Leasing (CMBFL), since Viking Sun will be the first Viking ocean ship to call on China.  The two day float out started when Mrs. Lou cut the cut that allowed water to fill the dry dock.  Once the ship is afloat, she will be moved to a wet dock where final outfittings for the ship will be done.

Viking Sun will debut in December 2017 and immediately set out on an epic 141 day world cruise.  The world cruise will visit 5 continents, 35 countries and more than 65 ports of call.

Viking Sun will be the fourth Viking ocean cruise ship.  Viking’s award winning ocean ships have made waves in the industry ever since Viking Star entered service in the Spring of 2016.  Every stateroom comes with a balcony on the 930 passenger ships.   With an nearly all inclusive experience, guests receive up to $200 per day in extras that the majority of cruise lines charge for.