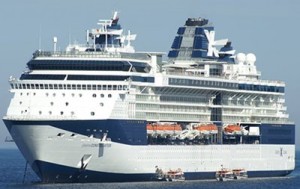 Update Tuesday 4:00 p.m.:  The Celebrity Constellation pulled out of Key West on Tuesday morning at approximately 6:00 a.m.  The ship left 8 hours later than expected due to a delay in getting the engine inspected.  The vessel is now in route to Nassau, Bahamas.

Cruise ship problems continue to plague the cruise industry in 2013.  In the latest setback for a cruise line this year,  the Celebrity Constellation has developed problems with a gas turbine engine while in Key West, Florida.  The cruise ship spent last night in Key West so repairs could be made and and is expected to leave port by 10 p.m. on Monday.

The Constellation as originally scheduled to visit Cozumel, Mexico on Tuesday.   Due to the extra time in Key West, the ship will no longer stop in Cozumel but will now be visiting Nassau, Bahamas on Wednesday, December 18.

Passengers were allowed off the ship so they were able to experience all that Key West has to offer after the sundown.  However, they were required to be back on board by midnight.

Repairs took longer than anticipated but Celebrity was able to replace the necessary parts to fix the engine.

Cruise Fever reached out to Celebrity and has yet to receive a response from Celebrity at the time of press.

The Celebrity Constellation is on a 5 night cruise that left Port Everglades (Ft. Lauderdale, Florida) on Saturday, December 14.  The only two ports on the ship’s original itinerary were Key West and Cozumel. The Constellation is scheduled to arrive back in Ft. Lauderdale on December 19.  The cruise ship, built in 2002, is a 91,000 gross ton ship that carries 2,000 passengers and another 1,000 crew members.

Cruise Fever will continue to monitor the Celebrity Constellation and will update this page as more information becomes available.  Celebrity is owned and operated by Royal Caribbean International.