The first of four blocks of Norwegian Cruise Line’s next cruise ship was floated out at the Meyer Werft shipyard in Germany on Friday December 5, 2014. 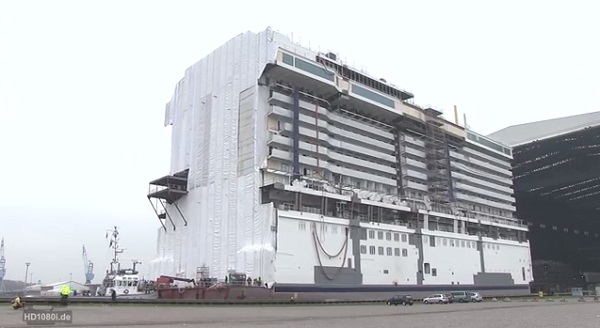 The Norwegian Escape is set to be completed in the fall of 2015 and will be the largest ship in Norwegian Cruise Line’s fleet at 164,400 gross tons.

The Escape will be sail out of PortMiami and will sail week long cruises to the Caribbean.  The ship will also be the largest cruise ship to be based out of Miami.

Video of the float out:

The Norwegian Escape will also feature the first Margaritaville at Sea.  The announcement was made this week during an annual meeting as Jimmy Buffett surprised Norwegian employees with an appearance.

The 5 O’Clock Somewhere Bar will be an outdoor complimentary restaurant that will help make up part of the ship’s Waterfront.   There will be nightly live music and the cruise line has plans to expand Margaritaville to the rest of the fleet in the near future.

There have been rumors that another cruise line, Royal Caribbean,  had been in talks with Buffett. However, it was Norwegian that was able to come to an agreement with him.

Plans include adding a Margaritaville and 5 O’Clock Somewhere Bar to Norwegian Cruise Line’s private island, Great Stirrup Cay in the Bahamas, in 2015.

A Margaritaville will also be added to Harvest Caye, Belize.  Harvest Caye is a private island bought by Norwegian that they are converting to a private paradise for their cruise ships.  Work on the island is expected to be completed in late 2015.