Passengers cruising on Princess Cruises in 2015 will be in for a memorable experience as the cruise line celebrates its 50th year of cruising.  Onboard celebrations will range from a themed menu, cocktails and entertainment, and anniversary decor and giveaways. 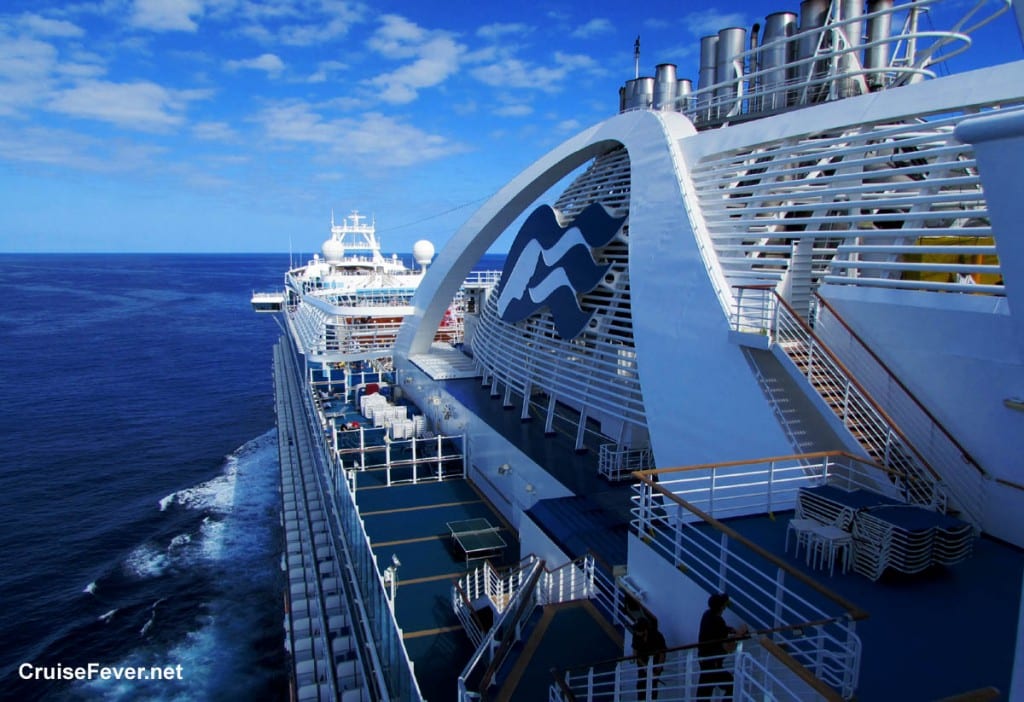 “We love helping our guests celebrate their many milestone occasions aboard their cruises, so to be able to mark our company’s golden anniversary with them in 2015 is very special.  We’ve developed many not-to-be-missed experiences commemorating our 50th and we know our guests will thoroughly enjoy the lively atmosphere found on board during our anniversary year.”

Love Boat Disco Deck Party – This 70’s theme night will honor the role that The Love Boat played in the cruise line’s history.  MUTS will showcase messages from the Love Boat cast, a Love Boat sing-a-long and show trivia, special montages from the show, and 70’s music videos. The party will also feature a celebration of all the weddings and anniversaries of passengers onboard, and an opportunity to take a photo with a Love Boat life ring.

Festive Food – A special souvenir menu will be presented in the main dining rooms on one night of every cruise featuring dishes from the past 5 decades.  Menu items will include Duck Terrine with Apricot Preserves and Filet of Turbot with Truffle Chive Sauce.  Since Princess is known for having the best pizza at sea, there will be anniversary pizzas such as Bacon & Brie and Thai, Potato, and Spicy Tomato and Shrimp.

Chocolate Journeys – Master pastry chef Norman Love has created two new anniversary desserts as part of the new chocolate experience.  The desserts will alternate from one voyage to another and will be Moist Chocolate Dome with Raspberry Creme Brulee and Bittersweet Chocolate Mousse, and Chocolate Raspberry Mousse with Vanilla Creme Brulee and Crunchy Shortbread.

Let Us Entertain You – A golden balloon drop will be held in the Piazza with some balloons featuring giveaway items hidden inside. “Here’s to Princess”, a song celebrating the cruise line’s history, will also be performed.  Game shows will also feature Princess trivia, and select sailings will have tribute bands like the Beatlemaniacs.

Anniversary Decor and Guest Giveaways – Passengers will receive a 50th anniversary tote bag and commemorative time line will be placed in each stateroom on embarkation day. The terminal and ships will feature anniversary decor and signage, including a spectacular anniversary display cake in the atrium.  Videos that share the company’s history and milestone events will be show on stateroom televisions. The bow of each Princess cruise ship will be adorned with a 50th anniversary flag.

Commemorative Keepsakes – The onboard shops and boutiques will feature limited edition merchandise commemorating this special 50th anniversary. There will also be photo opportunities that will have commemorative backdrops and folios.

Princess Cruise Line is now the 3rd largest cruise line in the world and started in 1965 with a single cruise ship (Princess Patricia) sailing to Mexico.