Carnival Corporation opened a third berth at their Puerta Maya pier in Cozumel today.  The additional berth is part of a $20 million investment that company has made to the Caribbean’s most visited destination. 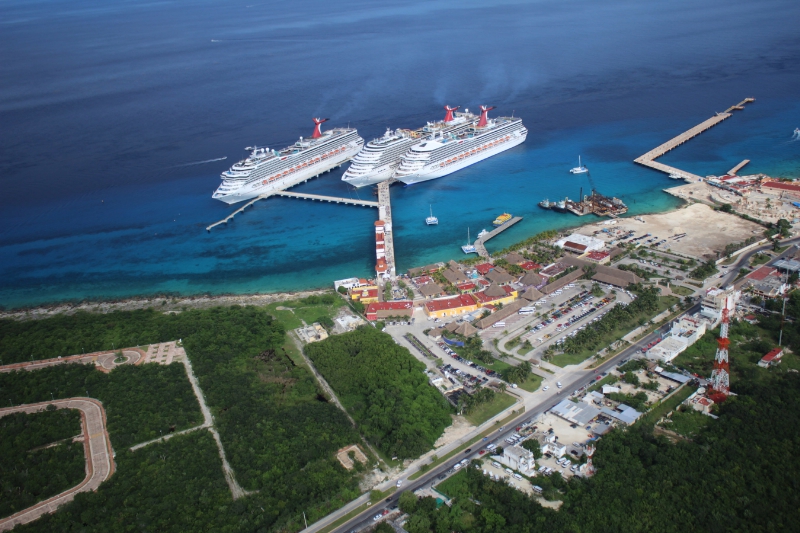 “Cozumel is the Caribbean’s most visited cruise ship destination and consistently receives high ratings from our guests. So the destination is in demand by our guests, and we are excited about officially opening the third berth to our pier, since it gives our brands greater flexibility for visiting Cozumel and more of our guests the opportunity to enjoy the island.”

The new berth has been 10 years in the making, ever since planning stages were first started in 2005.  The existing pier was re-opened in the fall of 2008 and is able to withstand a category 5 hurricane.  The original pier was severely damaged by Hurricane Wilma in 2005.

On-site dining options within the Puerta Maya complex include the Tres Amigos Bar, a theme restaurant inspired by the 1986 hit movie “Three Amigos” starring Steve Martin, Chevy Chase and Martin Short. The waterfront eatery — the first of its kind in the Caribbean — offers traditional Mexican fare, along with an extensive beverage menu.

Also featured is Pancho’s Backyard, an outpost of the popular downtown Cozumel eatery featuring magnificent ocean views, as well as Fat Tuesday, a waterfront bar offering frozen drinks and light snacks, along with a DJ and dance floor.

The shore excursion pier, separate from the main pier, allows for quick and convenient access to water-bound excursions serving both the mainland of the state of Quintana Roo and island of Cozumel.