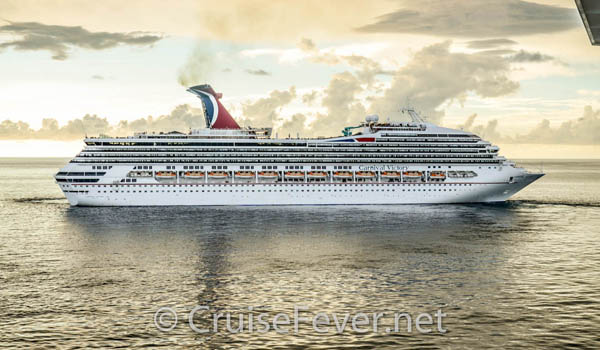 Carnival Victory was originally scheduled to sail a three night cruise to the Bahamas from Port Canaveral with a port stop in Nassau, Bahamas.  Carnival has now confirmed that the sailing will be canceled and posted the following regarding the October 6 sailing on Carnival Victory:

“Based on the latest forecast track and no discernible shift in the storm’s path towards the central east coast of Florida as we had hoped, it is anticipated that the Brevard County area, including Port Canaveral, will suffer the strongest effects of Hurricane Matthew throughout the day on Friday. Port Canaveral is presently closed to all marine traffic and we expect it to remain closed until the storm has passed and port officials have had the time to complete their assessment and make a determination on when the port is safe to re-open.

Given the above, unfortunately, we will be forced to cancel Carnival Victory’s cruise that we had hoped to operate tomorrow. Guests will receive a full refund as well as any pre-paid gratuities, Carnival shore excursions and any FunShop purchases. Refunds will be applied to the original form of payment within three weeks. We will also provide a 25 percent discount off a future two or three day cruise.”

Passengers who were booked on the October 7 sailing on Disney Dream may rebook a future sailing at a discount starting next Monday. Disney Dream was scheduled to sail to the Bahamas from Port Everglades with port stops in Nassau and Castaway Cay. Passengers will also receive a full refund.

It is rare that cruise lines cancel cruises due to hurricanes and tropical storms and so far, Carnival Victory, Disney Dream, and Majesty of the Seas are the only cruises that has been canceled so far due to Hurricane Matthew.

Several cruise lines, including Royal Caribbean, Disney, and Carnival,  currently have cruise ships delayed from returning to port.  Hurricane Matthew currently has maximum sustained winds of 140 mph and is tracking to ride up the Florida coast over the next two days.

For cruises that have been shortened, cruise lines are giving a prorated refund equal to the number of days missed.  Most cruise lines are also giving passengers the option to cancel for a full refund.

Cruise Fever will continue to monitor Hurricane Matthew and the effect that the storm is having on cruise itineraries. Future updates will be posted to CruiseFever.net.

Ben Souza
Ben is a world traveler who has visited 40+ countries and taken over 70 cruises. His writings have appeared and been cited in various media outlets such as Yahoo News, MSN, NPR, Drudge Report, CNN, Fox, and ABC News. Ben currently resides in Cincinnati, Ohio. Follow Ben on Instagram. Visit Ben Souza on Linkedin. You may email Ben at [email protected]
Cruise NewsMultiple Cruises Canceled Due to Hurricane Matthew
Previous article
Miss USA to Serve as Godmother of Carnival Vista
Next article
Royal Princess Emerges from Drydock With New Livery (Photos)