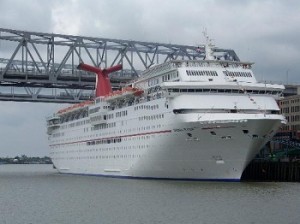 A few cruise ships have been waiting to come back to port in the wake of Hurricane Isaac.   The Carnival Elation is one of those ships that will be coming back to port at New Orleans as the Mississippi River has receded some of the flood waters and slowly returns back to normal.

Carnival has announced that its 2,000 passenger cruise ship Carnival Elation will return to the Big Easy a day behind schedule later tonight, and will depart on a rescheduled 3-night cruise in place of the 4-night cruise it’s next passengers booked.

Last night the cruise line was contemplating sending the cruise ship to the port in Mobile, Alabama, since the Mississippi River was closed, but the reopening of the river allowed the Elation to come back to its home port.

Embarkation on the Elation will be tonight between 6pm and 9pm at the New Orleans’ Erato Street Cruise Terminal.

In spite of this storm being out of the company’s control, Carnival is going out of its way to make it up to its passengers.  They are offering a 50% refund for the amount they paid for sailing and a 25% discount on any future cruises with the company on any 3-5 day voyage.

Cruise lines don’t have to offer any kind of reimbursement for changes in itineraries or schedules due to storms, and that’s typically where travel insurance can kick in.  But the cruise line is trying to keep its passengers loyal to the company with incentives like this.  If someone wants to schedule a cruise in hurricane season and they know certain cruise lines have offered refund packages in the past because of storms, they might be more inclined to book with those cruise lines.

It’s the U.S. Coast guard that closed the Mississippi River due to flooding, and even though there will be a few restrictions with the opening of the river, cruise ships will be allowed to come in later today.

J. Souza
Jon got hooked on cruising after his first cruise on his honeymoon, and today he is always looking for cruise deals and reading information about the cruise industry. Jon lives in the foothills of North Carolina and wishes there were a cruise port that far inland. Jon can be reached at [email protected]
Cruise NewsCruises Traffic out of New Orleans to Resume Tonight for Carnival Elation
Previous article
Princess Cruises Starts Construction on All New Regal Princess
Next article
Hurricane Leslie Eyes Cruise Ships in Bermuda