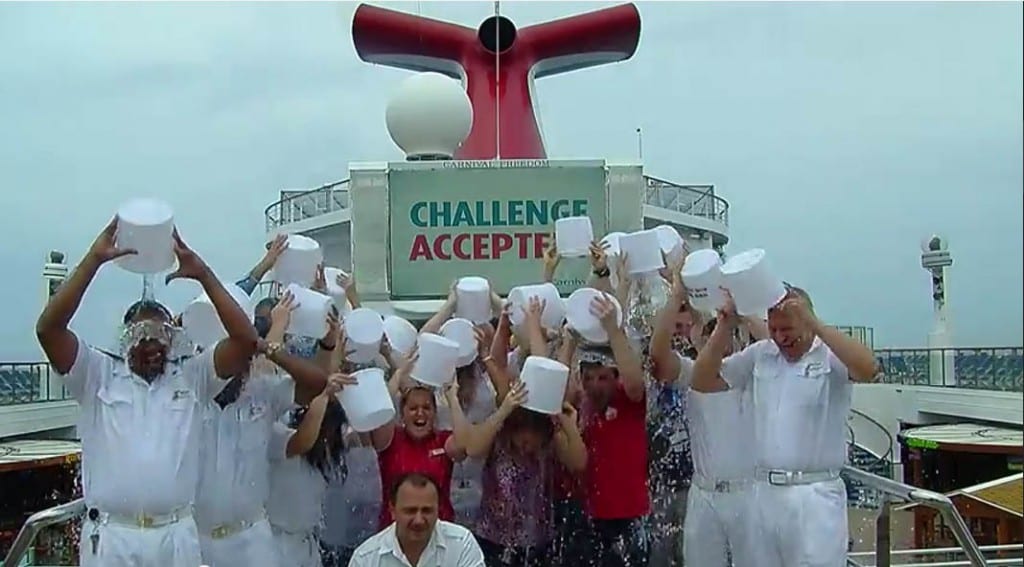 The challenge was accepted by Matt Mitcham, the cruise director on the Carnival Breeze, and he nominated the rest of the Carnival fleet and gave them 24 hours to complete it.  Every Carnival ship took part, all 24 ships in 24 hours.  Although most of the ships are currently cruising in the Caribbean, the Carnival Spirit is currently sailing in Australia where it is winter.

Carnival released a video showing all their cruise ships taking part in the challenge, including many of the cruise executives along with Gerry Cahill the CEO of the cruise line.  Carnival donated $100,000 towards ALS after completing the challenge.

The ice bucket challenge has been taking social media by storm over the past week as many celebrities have posted videos of themselves dumping buckets of ice cold water over their heads.  You may have even seen several of your Facebook friends taking part in the fight against ALS.

When someone takes the ice bucket challenge they nominate several people, usually 3, to participate or donate $100 towards fighting ALS.  Of coarse, those who do participate are also encouraged to donate money to fight the disease.

Since July 29, over $5.5 million has been raised for ALS through the Ice Bucket Challenge.  That compares to just $32,000 that was raised during the same time period last year.  Donations have come from over 150,000 donors.  Here is the link if you wish to donate to the ALS Association and help fight ALS.

Here is the video of all 24 Carnival ships taking part in the Ice Bucket Challenge and we hope that the other cruise lines follow suit.