The Grand Princess Cruise Ship to Be Based in San Francisco 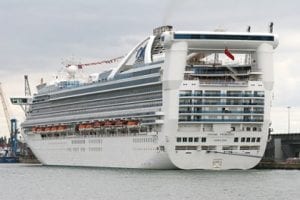 After undergoing a major overhaul last year, the Grand Princess will find its permanent home in San Francisco, California.  The ship will be a welcomed site for the bay-area cruisers who have been asking for more cruise options from the company.

This will be the first time that Princess has one of their ships stationed year round at the San Francisco port, but they have been trying to accomplish just that for a few years now.  An old law on the books of the city has thwarted other attempts for cruise ships calling the city home, but recent developments have allowed Grand Princess to offer several different cruise options throughout the year.

At the time of its inaugural voyage in 1998 the Grand Princess was the largest cruise ship in the world, and the overhaul last year has restored some of that glamour.  The ship can hold about 2,600 passengers and is over 950 feet long.

“Princess has been cruising from San Francisco nearly as long as our company has been in operation, so we have a rich history with the city, and we are the leading cruise line homeporting there,” said Jan Swartz, Princess Cruises executive vice president. “Our Bay Area passengers and travel agents have long been asking for more cruise options from San Francisco and our new year-round schedule with Grand Princess will now give them a great selection of itinerary choices, plus the benefit of sailing on a ship that offers our signature features and amenities.”

Grand Princess will offer cruises year round beginning in May of 2013.  Round-trip sailings from San Francisco will be going to Alaska, Mexico, California Coastal, and the Hawaiian Islands.

The newly improved ship offers all kinds of new amenities as well, including a new atrium, several new dining options, and even a tea lounge called “Leaves”.   Several of the lounges were renovated as well, and the Lotus Spa was also revamped.

Many of the itineraries on the Grand Princess will be fairly lengthy with 10 day Alaska voyages, 10 day sailings to Mexico, and 15 day trips to Hawaii.

J. Souza
Jon got hooked on cruising after his first cruise on his honeymoon, and today he is always looking for cruise deals and reading information about the cruise industry. Jon lives in the foothills of North Carolina and wishes there were a cruise port that far inland. Jon can be reached at [email protected]
Cruise NewsThe Grand Princess Cruise Ship to Be Based in San Francisco
Previous article
Cruise Ship Costa Fascinosa Set to Renew Hopes as New Flagship Vessel
Next article
Norwegian Breakaway Keel Laid into Place