After pioneering the first family-specific river cruises with an itinerary on the Danube in 2010, and after expanding with new family cruises on the Rhone and Rhine in subsequent years, Tauck is set to continue its leadership in the category in 2017 when it introduces a fourth family river cruise on a fourth European river. The company’s new eight-day “Family Fun Along the Seine: Paris to Normandy” will debut next year as Tauck doubles its family river cruising capacity, expanding from 10 departures this year to a total of 20 departures in 2017. In all, Tauck will offer over 20 different river cruise itineraries next year aboard nine vessels on Europe’s Danube, Rhône, Rhine, Seine, Saône, Moselle and Main Rivers. 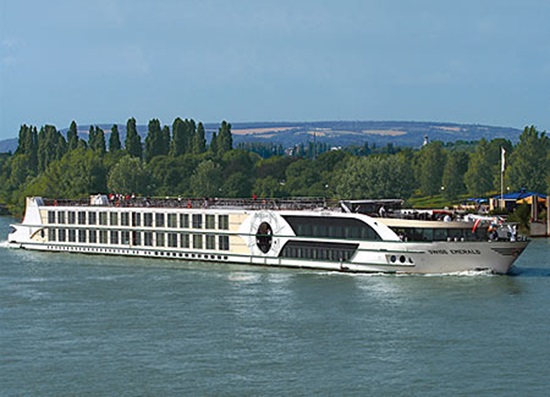 Tauck’s new family itinerary on the Seine (from $4,290 per person, plus airfare) begins with an included two-night hotel stay at the Paris InterContinental Le Grand. While in Paris, Tauck guests will participate in a scavenger hunt at the Louvre, have dinner high above the city inside the Eiffel Tower, and enjoy their choice of a panoramic city tour or a guided bicycle tour along the Seine, past the Musee D’Orsay, Tuileries Gardens and Eiffel Tower.

Guests will then board Tauck’s ms Sapphire riverboat for their five-night cruise along the Seine, enjoying a guided excursion to Monet’s house and gardens in Giverny, a walking tour of Les Andelys (or an optional hike to Chateau Gaillard, perched on a hillside above the village), and a visit to Versailles where guests can opt to tour the palace’s interior, or choose between a walking or biking tour of the palace’s gardens. A particularly unique and memorable experience is a full-day excursion from Caudebec to the D-Day Beaches of Normandy, where guests will visit the American Cemetery and tour an innovative museum offering hands-on encounters with World War II-era military vehicles, weapons, communications equipment and more.

Besides offering the new itinerary on the Seine, Tauck is also adding a number of enhancements to its other family river cruise in France, its eight-day “Bon Voyage! France Family River Cruise” on the Rhone. Among those enhancements are the addition of a bicycle ride along the Seine (during an included two-night hotel stay in Paris), and a hands-on “chocolate painting” experience in Arles. Tauck’s three family river cruises are part of the company’s collection of Tauck Bridges trips designed specifically for family groups. Tauck offers nearly 20 Bridges trips in all, including journeys in Europe, North America, Africa and Latin America.

Guests on both the Seine and Rhone river cruise itineraries will be sailing aboard newly refurbished vessels (the ms Sapphire and ms Emerald, respectively); part of a recently announced Tauck initiative to reconfigure more than 50% of the company’s European riverboat fleet. With 14 roomy, 300-square-foot suites – each with a pull-out couch and able to comfortably accommodate a family of four – the ms Sapphire and ms Emerald are each perfectly suited for family travel.

GODMOTHERS FOR THE NEW MS GRACE

Along with the announcement of their 2017 river cruising plans, Tauck has also announced the three women who will serve as godmothers for the company’s new ms Grace riverboat, launching next month in Maastricht, the Netherlands. Sharing the duties at the April 3rd christening will be a trio of long-time Tauck employees who are each involved in the company’s river cruising efforts; Katharine Bonner, Senior Vice President of Tauck River & Small Ship Cruising; Rebecca Sellet, Director Worldwide Operations, River & Small Ship Cruising; and Michelle Lavrado, Product Manager for European River Cruising.

Tauck CEO Dan Mahar explained that the selection of Bonner, Sellet and Lavrado was made in recognition of their commitment to Tauck’s guests, and their many contributions to Tauck’s river cruising efforts. “For more than a decade, Katharine, Rebecca and Michelle have helped us provide our guests with the world’s very finest river cruises,” said Mahar. “Their dedication and expertise have shaped every aspect of our guests’ experience, from the rich cultural immersion our guests enjoy in each destination, to the many impeccable details that distinguish each ship in our fleet, to the high levels of service provided by our Tauck Cruise Directors and Tauck Directors. We are so proud to honor these three wonderful professionals, and to acknowledge their incredible contribution.”

During Bonner’s, Sellet’s and Lavrado’s tenure Tauck’s river cruises have garnered a number of prestigious accolades, including being named “The World’s Best River Cruise Line” three times by the readers of Travel + Leisure magazine, being named to Conde Nast Traveler’s “Gold List” of the world’s best river cruise lines, and being selected for inclusion in National Geographic Traveler’s “50 Tours of a Lifetime.”

The ms Grace’s launch in April will be followed in June by the launch of a second new Tauck riverboat, the ms Joy. Each of the 135-meter ships will carry far fewer passengers – yet they’ll have far more director-level staff – than ships of the same size operated by other river cruise lines. Where the Grace and Joy will carry just 130 guests, other lines’ ships of the same length carry up to 190 passengers, or 46% more guests. And where other lines have just one cruise director, Tauck staffs each ship with a Tauck Cruise Director and three professional Tauck Directors.

With fewer passengers aboard their ships, Tauck is able to provide a more intimate, club-like atmosphere, a higher percentage of suites, and a second onboard dining venue, Arthur’s, with its own dedicated kitchen. Named for company chairman Arthur Tauck Jr., Arthur’s offers more casual dining in a more intimate setting, providing an alternative to the fine dining found in the ship’s main dining room, the Compass Rose.

Also notable on the Grace and Joy will be eight of Tauck’s innovative “loft” cabins, located on each ship’s lower (Emerald) deck, and each ship will have twenty-two 300 square foot suites. Each suite will be furnished with two French balconies with floor-to-ceiling windows, a pull-out couch, roomy walk-in closets with built-in drawers, and a spacious bathroom with rain shower. Along with the suites, the newbuilds also have thirty-two 225 square foot cabins, plus an additional thirteen cabins ranging from 150 to 190 square feet. All suites and cabins feature in-room movies, minibar, individual heating and cooling controls, luxury toiletries, and plush bedding with 100% goose down pillows, 400-thread-count linens and pillow-top mattresses.