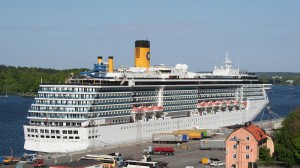 Costa Cruises announced today at Cruise Shipping Miami 2014 that they will be adding a second ship for the 2014-2015 winter Caribbean season.  Both ships will sail out of cruise port capital of the world, Miami, Florida.

The Costa Luminosa will be back in Miami sailing 10 night cruises with stops in the ports of Freeport, Bahamas; Ocho Rios, Jamaica; Grand Cayman; Grand Turk, Turks & Caicos; Roatan, Honduras; and Cozumel, Mexico.  Some itineraries will swap Grand Turk with a stop at the private island of Princess Cays and others will swap Freeport with Nassau.

The Luminosa will begin sailing these 10 night cruises out of Miami on December 20, 2014.

The Costa Mediterranea will be joining the Luminosa and will sail 7 night cruises to the Caribbean on December 12, 2014.  The exact ports of call on these sailings are still being finalized.

This will be the first time in 5 years that Costa will have 2 cruise ships based out of Miami, Florida. Costa is looking to capitalize on the massive Caribbean cruise market.