Crystal Serenity to Take Cruisers Around the Entire Globe 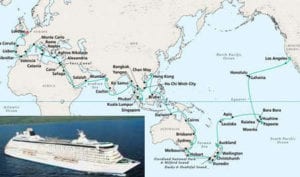 The luxury cruise line Crystal Cruises has announced that one of their two ships will be circumnavigating the earth in the beginning of 2015.

The 1,070 passenger cruise ship will take 108 days to travel all around the world, starting and ending in the same place in Miami, Florida.

Although the cruise line already offers “world cruises”, transatlantic cruises, and cruises that sail to Europe, South America, and all around Africa, this is the first time Crystal Cruises is offering a single sailing that can allow cruise passengers to say they circumnavigated the earth, just like Ferdinand Magellan (with a few more luxuries to enjoy).

Crystal Serenity will visit 14 countries and visit 44 ports, reaching every continent on the planet except Antartica.  Besides hitting some of the major ports around the world, Serenity will visit more rare sites for cruise ships like the Galapagos Islands, Madagascar, Easter Island, the Panama Canal, and many more.  From the Americas to Australia, New Zealand, and Cape Town, Africa, this cruise is the chance of a lifetime to see the world from one ship.

The world cruise will be broken up into 6 segments, which will allow cruisers to purchase just a leg of the journey if they cannot afford the cost or time of the full length tour.

Here are the six voyages that will make up the entire world cruise:

Each of these segments will be visiting many different ports along the way and these options allow cruisers to buy just one or even a few legs of the journey for around $5,000 to $9000 for one segment, depending on which one is chosen.

The journey will also explore the Amazon rainforest, the stunning fjords of New Zealand’s Dusky, Doubtful and Milford Sounds, the Panama Canal, and isles in the South Pacific and Caribbean.

So what do you think of a world cruise that circumnavigates the earth?   Sounds like a dream for us, but we would love to hear what our readers think of it.  Is there any such thing as too much time at sea?

J. Souza
Jon got hooked on cruising after his first cruise on his honeymoon, and today he is always looking for cruise deals and reading information about the cruise industry. Jon lives in the foothills of North Carolina and wishes there were a cruise port that far inland. Jon can be reached at [email protected]
Cruise NewsCrystal Serenity to Take Cruisers Around the Entire Globe
Previous article
Concordia Captain Apologizes to Survivors in Court
Next article
Norwegian Cruise Line Orders Breakaway Plus Ship