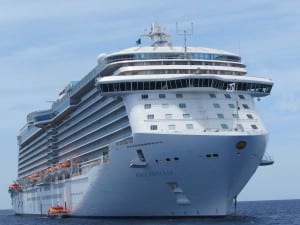 The ship is now expected to arrive in St Thomas on April 2 at 12:00 p.m., 4 hours later than originally scheduled. The Royal Princess will stay in St. Thomas until 8:00 p.m., to help make up for the late arrival.

The cruise ship began having power issues on March 31 when the power went out at 8:10 a.m. as the ship was in route to Princess Cays. Emergency lights came on but the ship was without propulsion and basic hotel functions (running water etc).

Power was restored to the ship within 15 minutes but the outage caused the ship to arrive later than scheduled into Princess Cays.

Tony Draper, the captain of the Royal Princess, kept passengers informed of the situation as he made announcements within 5 minutes of the power going out.

The power problems continued into the night as the ship experienced 2 more short outages at 1:15 a.m. and 6:30 a.m. on April 1. Captain Draper said that these two outages were unrelated to the first one and were caused by a generator problem.

Due to the outages, basic hotel functions and the ship’s propulsion were affected. This caused the ship to sail at a reduced speed of 15 knots.

Draper made a public address announcement that the problems have been fixed and the ship is once again sailing at full speed towards St. Thomas. He has made several timely announcements keeping the passengers informed of the problems.

The Royal Princess is currently on a 7 night cruise to the Eastern Caribbean out of Ft. Lauderdale with stops in the ports of Princess Cays, Bahamas; St. Thomas, U.S.V.I.; and Philipsburg, St. Maarten.

Cruise Fever will have all updates on the power problems with the Royal Princess and will update this page if/when more information becomes available.

Cruise Lines With Ships You Can Live On

J. Souza
Jon got hooked on cruising after his first cruise on his honeymoon, and today he is always looking for cruise deals and reading information about the cruise industry. Jon lives in the foothills of North Carolina and wishes there were a cruise port that far inland. Jon can be reached at [email protected]
Cruise News Several Power Outages Delay Princess Cruise Ship
Previous articleFirst Impressions of the Royal Princess
Next articleRoyal Caribbean Unveils 2015-2016 Bahamas, and Southern and Short Caribbean Vacations

Ben Souza - October 15, 2021
Carnival Cruise Line has half of their U.S. fleet back in service and the cruise line expects to have 17 cruise ships back in...

Ben Souza - October 14, 2021
Princess Cruises has announced restart dates for three more cruise ships that will reenter service in 2022. From February 13 through April 22, voyages onboard...