Comparing the RMS Titanic to modern day cruise ships is not a true apples to apples comparison. The Titanic was an ocean liner designed to transport passengers from one place to another while cruise ships are almost destinations themselves.

But still, it’s fascinating to see the developments in the cruise industry over the last 100 plus years as innovation, technology, and safety features have transformed how we vacation and cruise across the vast oceans of this world. 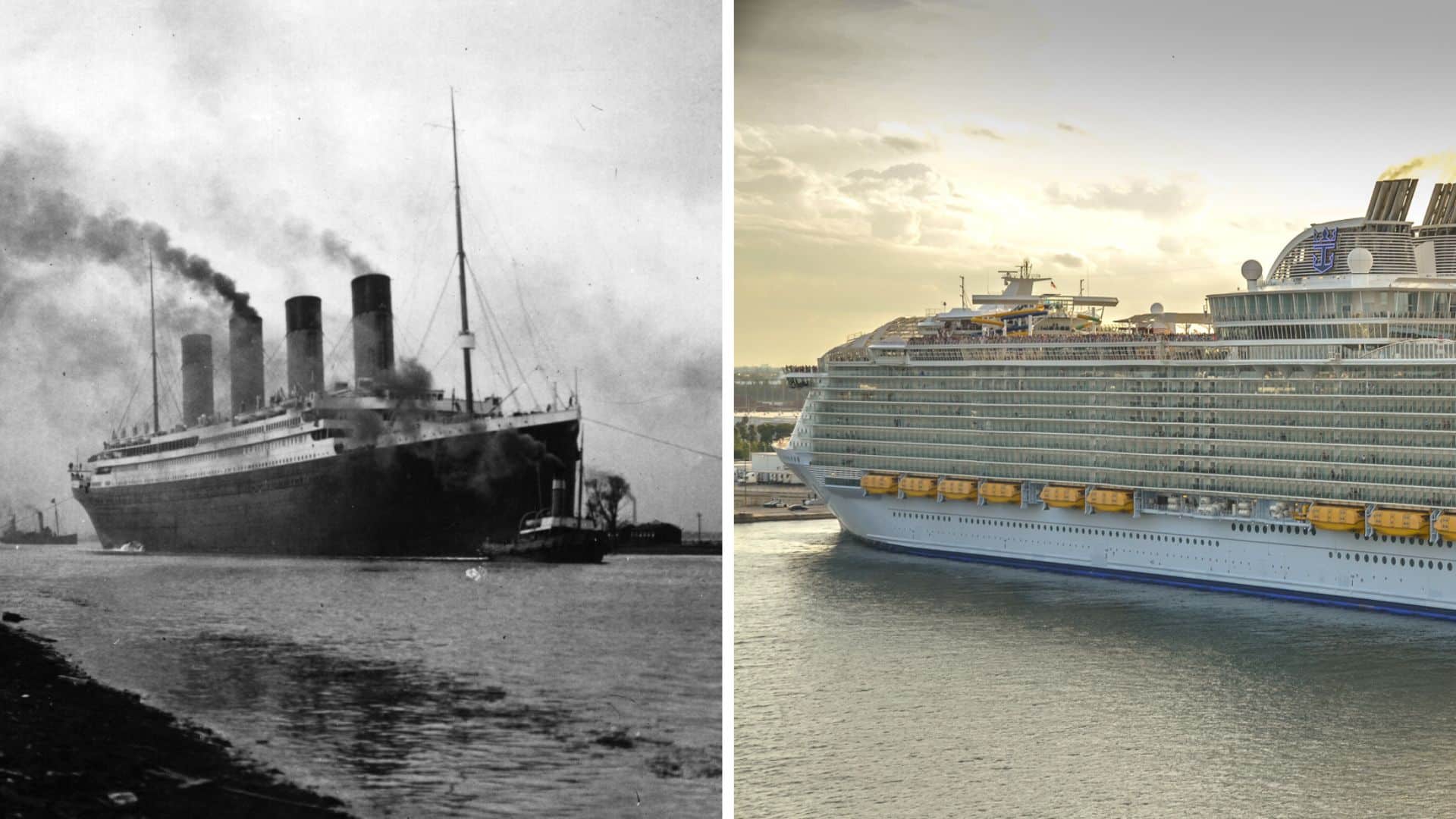 First, let’s look at a little information about this iconic vessel:

The RMS Titanic was a passenger ship that was famously known for its sinking in the North Atlantic Ocean in 1912 after colliding with an iceberg during its maiden voyage from Southampton, England to New York City. The disaster resulted in the deaths of more than 1,500 people, making it one of the deadliest maritime disasters in modern history.

The Titanic was built by the White Star Line, a British shipping company, and was the largest ship of its time. It was considered to be the most luxurious and technologically advanced ship of its era, with amenities that included a grand staircase, swimming pool, and gymnasium.

Despite its size and impressive features, the Titanic was not equipped with enough lifeboats to accommodate all of its passengers and crew, which contributed to the high death toll during the disaster.

The sinking of the Titanic garnered widespread attention and prompted changes in maritime laws to ensure the safety of passengers on ocean liners. The tragedy has been the subject of numerous books, films, and other works of media.

In this article we will compare the Titanic to today’s cruise ships in 10 key areas of interest. 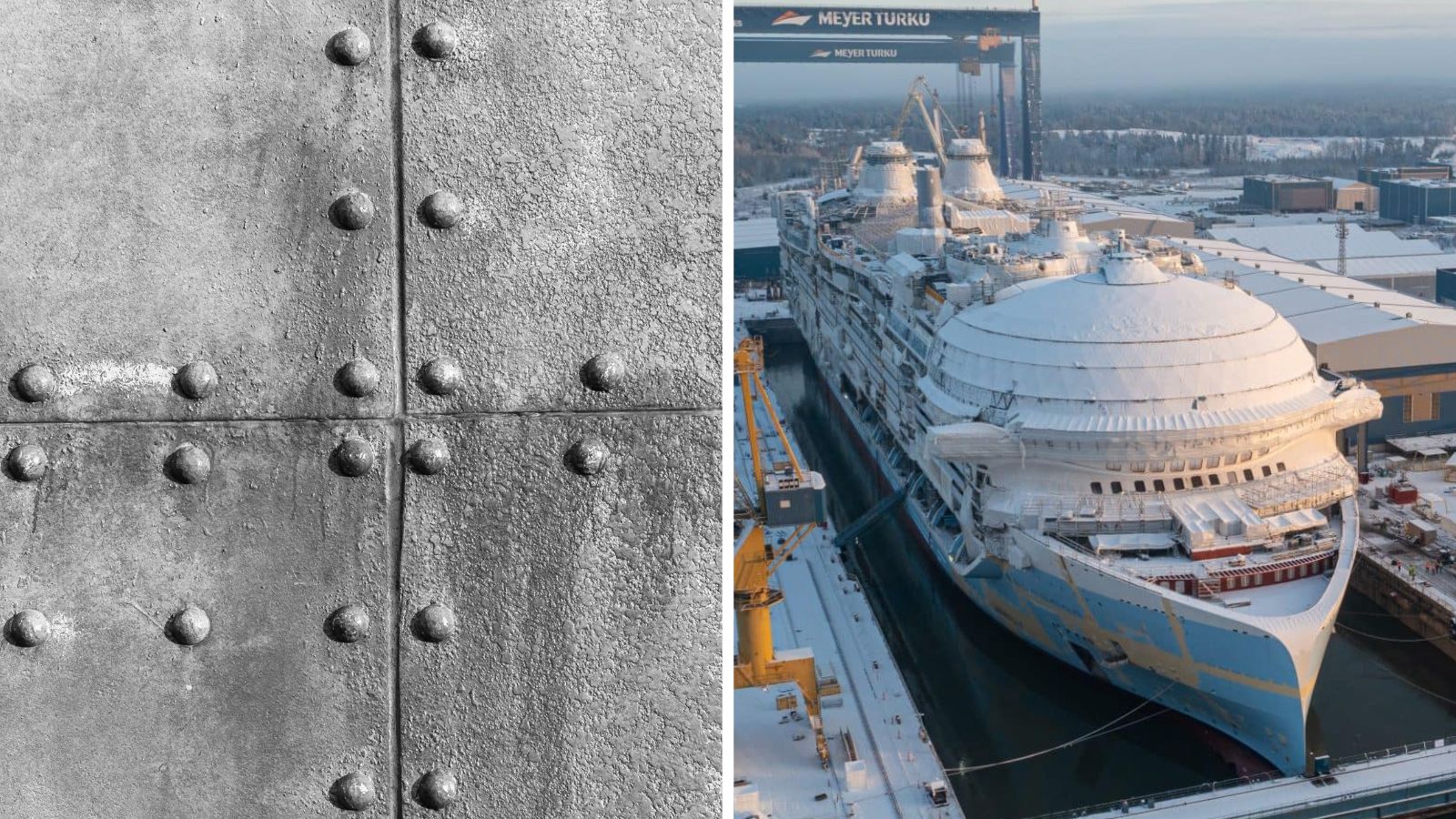 The Titanic was constructed with steel plates held together by rivets made of iron, a technology that was advanced for its time.

Today, the steel plates are welded together making the ships stronger and safer.

Additionally, the Titanic took 3 years to build, while modern cruise ships are constructed in around 2 years, sometime in less than 18 months.

It’s important to note that the size of a ship can affect its stability, fuel efficiency, and capacity for passengers and amenities. While the Titanic was considered a luxurious vessel at the time of its construction, it would be considered relatively small by today’s standards.

The RMS Titanic could carry up to 2,345 passengers and 892 crew, while modern cruise ships can carry almost 7,000 passengers at total max capacity with over 2,000 crew members on board.

First class cabins were located on the upper decks of the ship and were the most spacious and luxurious. They included private cabins with beds, dressers, wardrobes, and private bathrooms, as well as access to a grand staircase, a dining room, a library, a lounge, and a smoking room. First class passengers also had access to a gymnasium, a swimming pool, and a Turkish bath.

Second class cabins were also located on the upper decks of the ship and were smaller than first class cabins but still relatively spacious. They included private cabins with bunk beds and shared bathrooms, as well as access to a dining room and a lounge.

Third class cabins, or steerage, were located on the lower decks of the ship and were the least expensive and least comfortable. They consisted of shared cabins that could sleep up to 10 people and had limited amenities. Third class passengers had access to shared bathrooms and a dining room, but did not have access to the same amenities as first and second class passengers.

During the disaster, the ship was carrying approximately 2,208 people, which was close to its maximum capacity.

The RMS Titanic was known for its luxurious amenities, which were designed to make the voyage as comfortable and enjoyable as possible for its passengers.

First class passengers had access to a variety of amenities, including:

Second class passengers also had access to a number of amenities, including:

Third class passengers had access to fewer amenities, including:

In addition to these amenities, the Titanic also had a number of public areas, such as a promenade deck, a kennel for first class dogs, and a barber shop. The ship was also equipped with state-of-the-art technology, including Marconi wireless telegraphy, which allowed passengers to send messages to shore.

The Titanic was a passenger ship that was designed to be fast and efficient. It had a top speed of around 23 knots, or approximately 26 mph, which was considered to be quite fast for a ship of its size at the time.

However, modern cruise ships are significantly faster than the Titanic. The fastest cruise ships of today can travel at over 30 knots, or about 35 mph. Cunard Line’s Queen Mary 2 can achieve this feet which allows it to perform regular Transatlantic voyages in less than a week. Typically though, the average speed for cruise ships is about 22 knots, or about 25.5 mph.

In comparison, modern cruise ships have a number of additional safety features, such as: 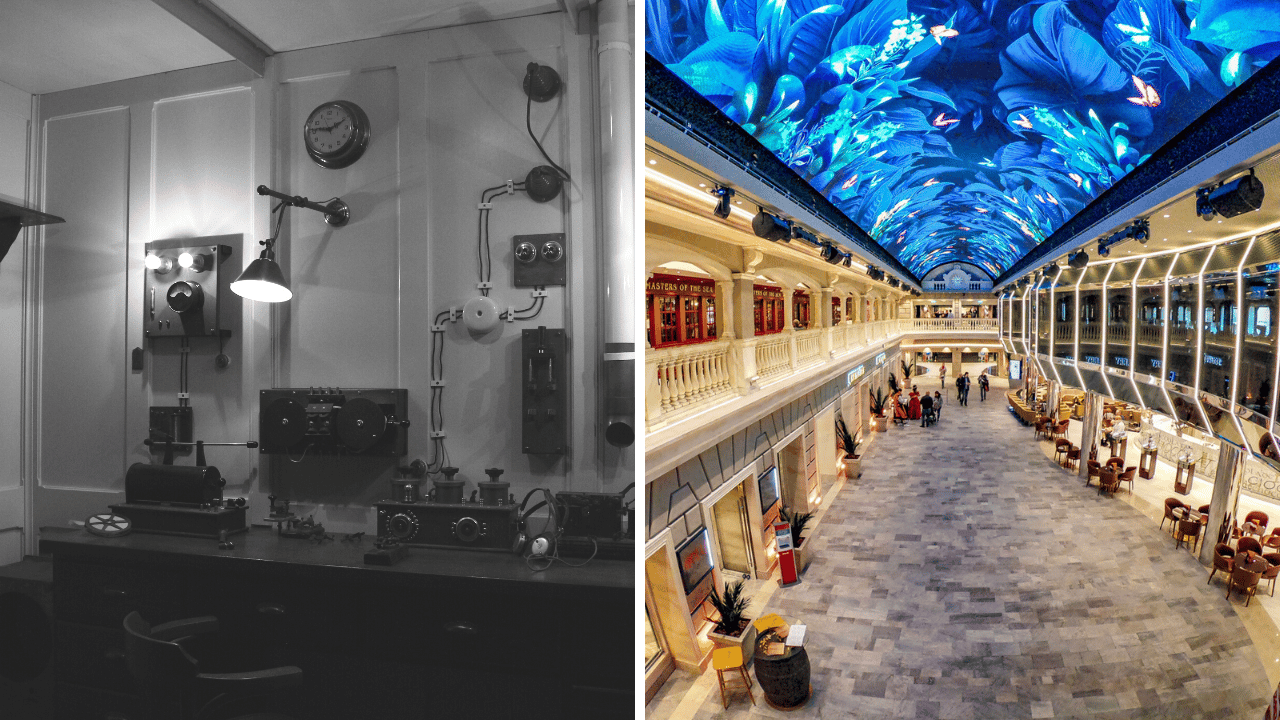 The Titanic was equipped with a number of technological features that were considered advanced for its time. Some examples of the technology that was available on the Titanic include:

What technology can be found on modern cruise ships?

Cruise ships have come a long way since their inception in the early 1800s. Modern cruise ships are packed with the latest technology, allowing passengers to stay connected and entertained during their voyage. From comprehensive Wi-Fi networks and multimedia entertainment systems, to robotics, 3D theaters and virtual reality experiences – there is something for everyone on board today’s cruise ships.

Passengers can now access high speed internet from anywhere on the ship and stay connected with friends and family back home. Multimedia entertainment options offer a wide variety of content such as movies, music and games delivered directly to their cabins or lounges. Cruise lines are also investing heavily into robotic technology that assists staff with tasks like cleaning rooms or serving food in restaurants.

Many modern cruise ships have advanced environmental systems, such as advanced wastewater treatment plants and energy-efficient lighting, to help reduce their impact on the environment.

The Titanic offered a range of dining options to cater to the diverse needs and preferences of its passengers. Here are some examples of the dining options that were available on the Titanic:

Cruise ships today offer an incredible array of dining options to passengers, from world-class restaurants to casual eateries. With the hospitality industry becoming increasingly competitive, modern cruise lines are constantly innovating and offering more delicious dining choices than ever before.

The range of cuisine available on cruise ships is truly impressive, with each ship boasting several different restaurants and bars. From classic Italian dishes at onboard pizzerias to all-you-can-eat buffets, there’s something for everyone. Fine dining venues serve up exquisite meals prepared by master chefs that rival those found in five star hotels on land. Passengers can even enjoy a romantic dinner for two or a private gourmet experience depending on their needs and preferences. With specialty dining on a modern cruise ship you can enjoy anything from Japanese food at a hibachi grill to Mexican Tapas. Of course there’s always the ever-convenient room-service as well.

The cost of a ticket on the Titanic was quoted in pounds sterling, as the ship was owned by the White Star Line, a British company. However, it is possible to convert the cost of a ticket into US dollars using historical exchange rates.

Keep in mind that the scheduled itinerary for the Titanic voyage was a 4-day journey.

It’s important to note that these prices were very expensive for the time and would have been out of reach for many people. The majority of passengers on the Titanic were traveling in third class.

The cost of a cruise today varies widely. For a 4-5 day cruise you can pay anywhere from $200 per person with taxes and fees to several thousand. A more luxurious cruise on a cruise ship with Cunard will start around $750 to $1,000 per person for a 4-5 night itinerary, and this is probably a good comparison. While there are no classes of passenger on a cruise ship today there are varieties of staterooms that can drastically alter the cost of a cruise and the amenities offered.

The Titanic was a remarkable feat of engineering for its time, but compared to modern cruise ships it is like night and day. When it comes to amenities, modern cruise ships offer more than just a pool and dining hall; they have movie theaters, rock climbing walls, ice skating rinks, and even miniature golf courses. Safety features are also much improved in modern ships; they now have double hulls and lifeboats to accommodate every passenger in case of an emergency.

Modern ships also have many more propulsion options such as gas turbines, diesel engines, and even LNG (Liquefied Natural Gas) which make them much faster than their predecessors. Finally, modern cruise ships are far more environmentally friendly with advanced wastewater management systems and energy efficient technologies that reduce their carbon footprint significantly. The Titanic may have been revolutionary for its time but compared to today’s cruise ships there have been too many advancements for a true comparison.

Comparing Titanic to modern cruise ships serves as a reminder of how far technology and safety have come in the maritime industry. Titanic was a marvel of its time but it would be difficult for passengers today to travel on such an antiquated vessel with its limited amenities and lack of safety features. Modern cruise ships are designed with comfort, luxury, and safety in mind, and they offer a wide range of activities that ensure that each passenger has an enjoyable experience during their journey.

J. Souza
Jon got hooked on cruising after his first cruise on his honeymoon, and today he is always looking for cruise deals and reading information about the cruise industry. Jon lives in the foothills of North Carolina and wishes there were a cruise port that far inland. Jon can be reached at [email protected]
Cruise FactsThe Titanic vs Modern Cruise Ships in 10 Key Areas
Previous article
Best Adults Only Cruise Lines and Ships
Next article
The 8 Royal Caribbean Cruise Ships Sailing to the Caribbean in 2024-2025