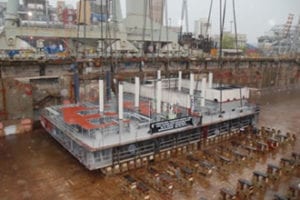 Princess Cruise Lines newest cruise ship, the Royal Princess, completed a significant milestone on October 20 when the keel was laid into place.  The keel, the bottommost part of the ship, is the first of many milestones as the ship begins to be built in anticipation of a debut in 2013.

Princess kept with the tradition of having the keel blessed by a priest before having it lowered into position.  The 500 ton keel was lowered into place by a huge crane onto the keel blocks.  The computer guided maneuver was over in minutes, just a fraction of the 2 million man hours that will go into building the Royal Princess.

The Royal Princess will be a 3,600 passenger, 141,000 gross ton ship that will remain in the building dock until it is floated out into the water next summer.  We will keep you updated on the contruction of this new ship as progress continues.