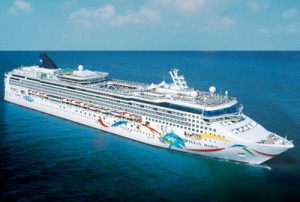 Breaking news out of the Boston reports that the Norwegian Cruise Line ship, Norwegian Dawn, has docked after 2 passengers were found dead. The ship docked at 6:30 am at the Black Falcon Cruise Terminal where police were responding. The 2 deaths are believed to be separate incidents.

The cruise ship was returning from Bermuda after a 7 night cruise.

One of the passengers was a 67 year old woman from Tiverton, R.I., who police say died of an apparent medical condition and they do not consider the death to be suspicious.

The 2nd death was a 23 year old man from Littleton, N.H.  The cause of death is not known at this time.  His cabin was being processed for possible evidence.  Daniel Conley, the Suffolk District Attorney, said that there has yet to be any indication of foul play. Since the man died outside of state lines, the investigation might be handled by federal authorities.

Police have since determined that both deaths were  non-homicides and unrelated.  Since there will be no criminal charges filed, no further details will be released.

Many passengers on board have said that they didn’t know the deaths occurred until they were back in Boston disembarking.  The 16 deck cruise ship holds 2,224 passengers and a crew of 1,073.  A physician and nurse are stationed on board to provide any medical care that may be needed on each cruise.

Norwegian has yet to release any names of those involved.

We will continue to bring you updates as more information becomes available and as we wait for a statement from Norwegian.

Ben Souza
Ben is a world traveler who has visited 42 countries and taken over 50 cruises. His writings have appeared and been cited in various media outlets such as Yahoo News, MSN, NPR, Drudge Report, CNN, Fox, and ABC News. Ben currently resides in Cincinnati, Ohio. Follow Ben on Instagram. Visit Ben Souza on Linkedin. You may email Ben at [email protected]
Cruise NewsNorwegian Dawn Docks After 2 Passengers Found Dead
Previous article
Fewer Cruise Ships to Sail from Port Everglades in 2012
Next article
Investigation for Death of Baby on Carnival Dream Moves to Indiana