Investigation for Death of Baby on Carnival Dream Moves to Indiana 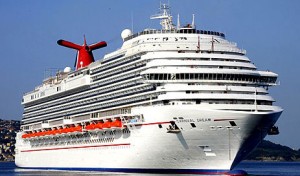 On October 12, a crew member of the cruise ship the Carnival Dream found a dead newborn while cleaning the cabins.  The ship was docked at the island of St Maarten for the day and the Dutch authorities on the island took custody of the body.

The FBI investigation of the incident has moved to Indiana, the home of the mother of the baby.    The FBI office in Miami had been investigating the case.  The Sentinel has noted that the FBI is not saying whether it thinks a crime was committed.

The FBI searched 2 cabins on board the 3,636 passenger luxury cruise ship when it returned back to Port Canaveral, Florida.  Several crew members and passengers were also interviewed.  The FBI has yet to release any information about the case, including the name of the mother.  She had been on board the Dream in celebration of a girlfriend’s birthday.

The mother told a local news outlet in St Maarten, sxmislandtime.com , that she did not know that she was pregnant and the birth of the child was a surprise to her.

An autopsy was performed on the child in St Maarten and suggested that the baby died after the Carnival Dream left Florida but before it reached the island of St Thomas 3 days later.  Authorities believe the baby had been dead for 1-3 days before it was found by the room steward.

The Carnival Dream was on a 7 night cruise to St Thomas, St Maarten, and Nassau, Bahamas.