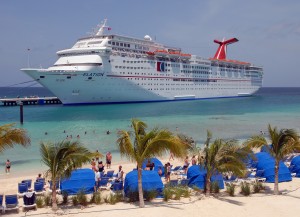 Here are a few fun facts about cruise ships.  We will be adding more as we come across them.

The largest cruiseline in the world is Carnival Cruise Line.  They currently operate 23 ships under the Carnival Brand.  They also own 11 other cruise brands such as Princess, Holland America and Costa.

Over 19 million people worldwide took a cruise in 2011 accounting for $29.4 billion in U.S. dollars.

10 of the 14 largest cruise ships in the world are owned by Royal Caribbean Cruise Line.

A majority of the cruise ships in service by the major cruise lines are at least twice the size of the Titanic (46,000 gross tons).

The first woman to be named captain of a major cruise ship was Karin Stahre Janson.  She is captain of Royal Caribbean’s Monarch of the Seas.

The ship build exclusively for cruises was the Prinzessin Victoria Luise which was completed in 1900.

The most popular cruise port is St Thomas, U.S. Virgin Islands.  There can be up to 10 ships visiting in a single day during the high season.

Ben Souza
Ben is a world traveler who has visited 40+ countries and taken over 70 cruises. His writings have appeared and been cited in various media outlets such as Yahoo News, MSN, NPR, Drudge Report, CNN, Fox, and ABC News. Ben currently resides in Cincinnati, Ohio. Follow Ben on Instagram. Visit Ben Souza on Linkedin. You may email Ben at [email protected]
Cruise FactsFun Facts about Cruise Ships
Previous article
Unlimited Soda Cards on Cruise Ships
Next article
How Does Price Protection Work with Carnival Cruise Lines?