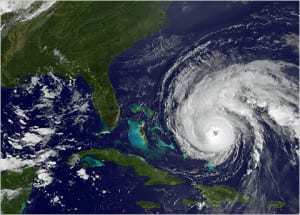 The 2013 hurricane season officially began on June 1 and will run until November 30.  Each year, tropical storms and hurricanes cause cruise lines to alter the itineraries of their ships to keep the passengers and crew members out of harms way.

The National Oceanic and Atmospheric Administration’s Climate Prediction Center has predicted that there will be between 13-20 named storms and 7-11 of those becoming hurricanes.  They also predict that there could be 3- 6 hurricanes that develop into category 3 (major hurricanes) or higher storms.

The 2012 hurricane season saw several storms force cruise ships to alter itineraries.  The largest storm Hurricane Sandy caused a major headache for cruise lines as well as very rough seas for ships that were in the Atlantic Ocean.  What happens if there is a hurricane or tropical storm during my cruise?

The National Hurricane Center monitors all storms and potential storms with live tracking on their website.   It can be a handy tool if you are embarking on a cruise in the near future and are worried about the threat of tropical storms.

It is important to remember that cruise lines will do everything in their power to ensure that a cruise goes on and is not canceled.  Many times this means that a cruise to the Western Caribbean will be changed to a Eastern Caribbean itinerary.  At other times, it can mean a few extra seas days if the captain feels it is unsafe to dock the ship in port.

Here are the named tropical storms for the 2013 hurricane season.  If and when any of these storms affect cruises, we will update each storm with a link to information about any changes.

Cruise Fever will update this page throughout the 2013 hurricane season and will bring the latest updates on any changes that cruise lines have to take because of storms.