2012 Hurricane Season and Cruises, What to Expect 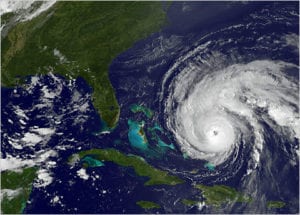 What does that mean for cruises?

There have already been two tropical storms form in late May when Alberto and Beryl formed off the southeast coast of the United States.  Neither storm had much, if any affect on cruise ships.

Tropical storms and hurricanes can affect cruises and cause them to miss ports and change itineraries.  This was true in 2011 when Hurricane Irene caused ships from Carnival, Royal Caribbean, Norwegian, and other cruise lines to alter cruises.  There were no cruises canceled from the hurricane.

Captains will keep the ships away from the storms so passengers will be safe and can enjoy the sunny vacation that they paid and were expecting.  Sometimes this means that cruises can switch from an Eastern Caribbean itinerary to a Western Caribbean at the last minute if a large, powerful hurricane is threatening the islands.  It is rare that a cruise gets canceled due to a hurricane.

The National Hurricane Center monitors all storms with live tracking.  If you are embarking on a cruise, you can view their website and see if any tropical cyclones are forming in the Atlantic or are on track to threaten the ports of call you are visiting.

Here are the named tropical storms for 2012.  Each storm will be linked to the information on how it has or is currently affecting cruises.

Ben Souza
Ben is a world traveler who has visited 40+ countries and taken over 70 cruises. His writings have appeared and been cited in various media outlets such as Yahoo News, MSN, NPR, Drudge Report, CNN, Fox, and ABC News. Ben currently resides in Cincinnati, Ohio. Follow Ben on Instagram. Visit Ben Souza on Linkedin. You may email Ben at [email protected]
Cruise News2012 Hurricane Season and Cruises, What to Expect
Previous article
The Cost of Cruising with Infants and Young Children
Next article
Benefits to Booking a Guaranteed Cabin on a Cruise