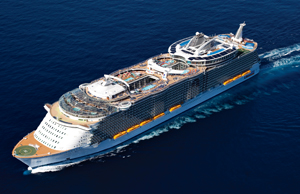 Less than two weeks after Norwegian Cruise Line announced that they had placed an order for their largest ship yet (Breakaway Plus), Royal Caribbean and Carnival have also released plans to build additional mega ships.

In early October, a rumor went around the web that Royal Caribbean was in talks with Turan Sanomat to build a third Oasis Class ship to be launched in 2015/16.  Royal Caribbean has now confirmed that they have plans to develop a sister ship to the Allure and Oasis of the Seas, currently the two largest cruise ships in the world.

The Oasis and Allure have been a huge success for Royal Caribbean and are still commanding a premium price, even after over two years.  Chairman and CEO Richard Fain said during RCCL earnings report: “The Oasis of the Seas and Allure of the Seas have proven themselves to be exceptionally attractive ships by generating the highest guest satisfaction ratings in the fleet coupled with very compelling financial returns.”

There are some drawbacks to these 225,000 ton ships, they are unable to stop in some ports due to their size.  Ports such as Grand Cayman and Coco Cay require tendering and other ports are too small or shallow for the ships.  Many ports had to be renovated and dredged to accommodate the Oasis/Allure.  Royal Caribbean has yet to release any details on this third Oasis ship and it is unlikely to be exactly the same.

Carnival Corp., the world’s largest cruise line, also announced plans to build a ship for the Carnival brand and the Holland America Line.  Carnival now has nine ships scheduled for delivery in the next four years, two for 2013, two for 2014, three for 2015, and two for 2016.

This latest ship is scheduled to be delivered in the winter of 2016 and hold 4,000 passengers.  It will be the largest ship to sail under the Carnival Brand at 135,000 tons.  The Breeze, Dream, and Magic are currently the largest at 130,000 tons.

As cruise lines continue to announce new and larger ships, the state of the cruise industry looks to remain strong.  Over the past several years, the entertainment, activities, and value have dramatically improved and it is likely to get better as cruise lines try to out do each other and offer the best product.