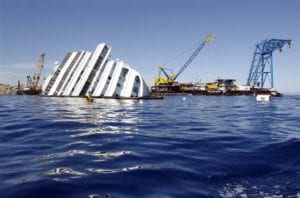 The former captain of the Costa Concordia cruise ship has filed a lawsuit against the cruise line for wrongful termination.   The skipper, Francesco Schettino, was fired after the cruise ship hit a reef and 32 passengers and crew members were killed.

Schettino’s lawyer Bruno Leporatti said in a statement,  “It is the right of every worker to appeal against his dismissal and Captain Schettino has done no more than exercise that right.  There is nothing to contest or be amazed about, unless we want to say that what the law allows for all citizens doesn’t apply for Francesco Schettino.”

Schettino says that his skillful maneuvering of the Concordia after the ship hit a reef saved many lives as he positioned the vessel closer to land.  However, if he had not gone off course, the disaster would never have happened.

The captain has been ridiculed since the January 13 accident off the Tuscan coast.  He is being charged with manslaughter after his reckless moves put the ship and the 4,200 passengers and crew members at risk. A charge of abandoning ship has also been levied against Schettino after he disembarked from the cruise ship before all the passengers and crew members were safely off.  His trial is expected to begin on October 15, 2012.

The Costa Concordia remains half submerged under water as the slow process to cleanly remove the ship and restore the reef has begun.

Ridiculous lawsuits aimed at cruise lines are not anything new.  In the past few months, a passenger has sued Carnival for the pool deck being too hot.  Another passenger sued a different cruise line after he became offended at jokes made by the ship’s comedian. There has not been any word on whether the lawsuits were successful in court.

Cruise Fever will have all updates of the lawsuit and prosecution of the Italian captain as they unfold in court.