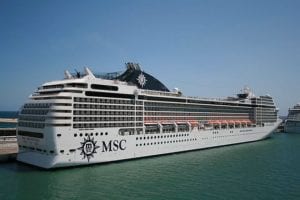 There has a report of a bacterial meningitis outbreak on the MSC Orchestra after four crew members were diagnosed with the illness and hospitalized.  One of the crew members is in serious condition the cruise line reported.  The sickness was first reported by Seatrade Insider.

The cruise ship was sailing a cruise in Europe when the outbreak happened.  All 2,723 passengers and 967 crew members received antibiotics as a precaution and in agreement with maritime authorities.  Additional health experts joined the crew in Livorno, Italy and no passengers or crew members had shown any symptoms of meningitis.

Bacterial meningitis is a severe illness that causes sudden fever, headache and stiff neck.  There are over 4,000 cases of the illness each year in the United States resulting in about 500 deaths.

The MSC Orchestra has continued on with its itinerary and has stops scheduled in the ports of Ibiza, Tunisia, Catania, and Naples.  Cruise Fever will have any additional information when it becomes available.

Note: This outbreak is unrelated to the fungal meningitis outbreak in the United States that was caused from contaminated steroid shots.