As the cruise industry continues to grow, just about every mainstream cruise line has a cruise ship under construction that will debut in the next two years.  Here is a rundown of cruise ships (in alphabetical order) that are currently being built in shipyards across the globe. 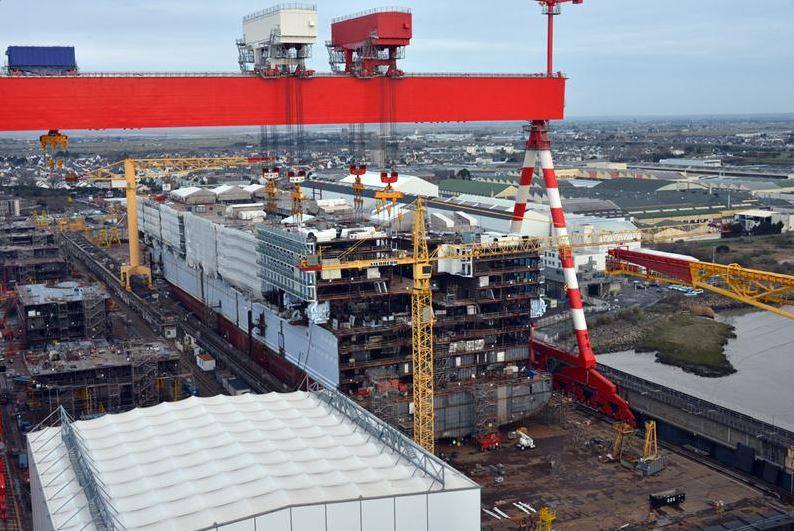 Carnival Horizon – Carnival Cruise Line’s 26th cruise ship, Carnival Horizon will debut in March 2018.  The 133,500 gross ton vessel will be a sister ship to Carnival Vista and will carry nearly 4,000 passengers at double occupancy. Carnival Horizon is currently under construction at Fincantieri shipyard in Italy.

Majestic Princess – The 3rd Royal class ship from Princess Cruises, Majestic Princess will homeport in Shanghai when the ship is completed in the summer of 2017. The ship will have the following popular Royal class features: glass floor walkway that extends over 100 feet over the water, the largest outdoor screen at sea, and large multi-level piazza.

ms Nieuw Statendam – Last month, the first piece of steel was cut for Holland America Line’s 15th cruise ship, ms Nieuw Statendam.  The 99,500 gross ton vessel will be a sister ship to ms Koningsdam and will debut in November 2018.  The ship will carry 2,650 passengers and will feature Pinnacle Class amenities and innovations.

MSC Meraviglia – MSC Meraviglia will be the largest cruise ship in MSC’s fleet when the 167,600 gross ton ship debuts in the spring of 2017.  The ship will have two unique Cirque du Soleil shows, 315 foot long Mediterranean style promenade, unprecedented choice in fine and casual dining options, enriched family offerings, and cutting edge entertainment for all ages.

MSC Seaside – Named the hottest new cruise ship in 2017, MSC Seaside is the first of the next generation of ships from MSC Cruises.  This 154,000 gross ton ship will carry 4,100 passengers and sail year round to the Caribbean from PortMiami when the ship debuts in December 2017.

Norwegian Joy – Norwegian Joy will enter service in the spring of 2017 and will be the second Breakaway Plus class ship from Norwegian Cruise Line. The ship is being styled exclusively for Chinese travelers and is expected to mimic an upscale resort style vacation with world class entertainment, fine dining, and unrivaled duty free shopping.  Norwegian Joy will also feature the first racetrack at sea.

Viking Sky – Viking Sky will be the 3rd ocean cruise ship from Viking Cruises and will enter service in early 2017. At 47,800 gross tons, this 930 passenger cruise ship will feature balconies in every stateroom, an aft infinity pool, the popular Explorer’s Lounge, Wintergarden, and indoor/outdoor pool. Viking Sky will be a sister ship to Viking Star and Viking Sea.

Ben Souza
Ben is a world traveler who has visited 42 countries and taken over 50 cruises. His writings have appeared and been cited in various media outlets such as Yahoo News, MSN, NPR, Drudge Report, CNN, Fox, and ABC News. Ben currently resides in Cincinnati, Ohio. Follow Ben on Instagram. Visit Ben Souza on Linkedin. You may email Ben at [email protected]
Cruise NewsCruise Ships Currently Under Construction
Previous article
Carnival Cruise Line is the Headquarters for The Cat in the Hat’s Presidential Campaign
Next article
Norwegian Offering All Inclusive Cruises from $58 a Night