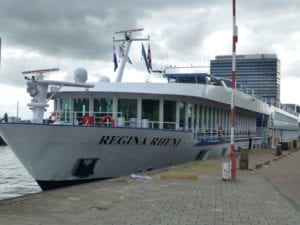 More than 100 passengers from the UK on the river cruise ship Regina Rheni had to be evacuated this morning after a fire broke out on board.  The ship was sailing on the Rhine in Germany at the time of the accident.

There are reports that ten passengers were treated for smoke inhalation and one passenger was admitted to a local hospital after having an asthma attack.  There were no other injuries reported.

The fire began in the engine room and was extinguished within 3 hours.

The passengers had booked through a vacation firm named Saga.  Saga has said that all passengers will be fully refunded and were given the opportunity to return to the UK.  However, they have decided to stay at the hotel for the time being.

This is the second report of a cruise ship fire taken place on a river cruise boat this year. The Costa Allegra, Azamara Quest, and Royal Caribbean’s Allure of the Seas have all had fires break out on ocean liner cruise ships in 2012.  However, the fire on the Allure of the Seas caused little damage and the ship continued without any problems.

Cruise Fever will continue to bring you the latest updates as more information becomes available about this incident.