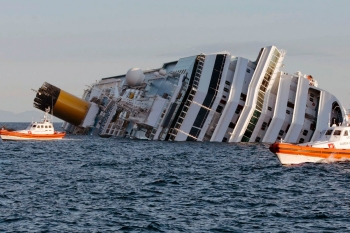 The fuel has already been removed from the half-sunken Costa Concordia as crews begin to remove the wreckage from the coast of Giglio.  This is expected to be a year-long process in which salvage companies will attempt to limit the impact on the economy, tourism, and environment of the Italian island.

Within the next few days Pompano beach salvage company, Titan Salvage, and an Italian marine contractor, Micoperi, will begin the 12 month process of refloating the ship in order to remove the wreckage from the area.

The plan will be to refloat the hull in one piece and then break down the job into four steps which are detailed below:

After the wreckage has been removed attempts will be made to clean up the ocean floor and plant any marina flora that had been affected.

Costa Crociere President Gianni Onorato stated that the company is doing everything it can to limit the impact on the environment, even with the most complex salvage operation ever undertaken.

“As was the case with the fuel-removal operation, we have always worked to find the best possible and safest solution to protect the island, its marine environment and its tourism industry,” he said. “We are now launching a salvage operation with characteristics and technical complexities that have never been faced before. There will inevitably be some unknowns in a project of this scope, but we are sure we have made the right decision and will continue to work to our best ability and on schedule.”

All of this work will come at a price-tag of about $300 million.  Titan Salvage stated that this would be the biggest refloat in history but that the company was ready to take on the challenge.

The Italian firm Micoperi expects the ship to be refloated by February of 2013.

2,300 metric tons of fuel have already been removed from the wreckage, which was the biggest concern for some expecting an environmental disaster, and crews are optimistic that this huge salvage operation will run smoothly, in spite of the enormous complexities ahead.

J. Souza
Jon got hooked on cruising after his first cruise on his honeymoon, and today he is always looking for cruise deals and reading information about the cruise industry. Jon lives in the foothills of North Carolina and wishes there were a cruise port that far inland. Jon can be reached at [email protected]
Cruise News Biggest Wreckage Removal to Begin for Costa Concordia
Previous articleSea Trials Completed, Carnival Breeze to Debut on June 3
Next articleTropical Storm Alberto Shouldn’t Affect Cruises