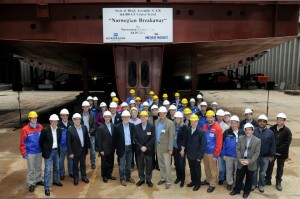 Norwegian Cruise Line’s newest cruise ship, the Norwegian Breakaway, began start of the block assembly with the keel being laid into position.   Executives for Meyer Werft cheered as NCL CEO Kevin Sheehan laid the traditional lucky coin and the first 350-ton block was laid into place.

The May 4, 2012 ceremony took place at  Meyer Werft in Papenburg, Germany.  In addition to the keel, an additional 72 blocks will be used to form the structure of the ship.  Meyer Werft is using a new efficient construction process that will allow the 140,000 ton ship to be built in less than one year.

Kevin Sheehan said “The anticipation is building for this incredible ship.  It’s thrilling to mark the start of the block assembly and realize that in one year we will take delivery of Norwegian Breakaway. We can’t wait.”

The Breakaway is scheduled to have her maiden voyage in the spring of 2013 as she begins week long cruises to Bermuda.  The ship will also be the largest cruise ship to call the Port of New York home.

NCL recently announced that the Breakaway, which will carry up to 4,000 passengers, will feature the first water park at sea.   The ship will have many features that will be firsts for the cruise industry.  The Breakaway will compete against Royal Caribbean’s Allure/Oasis of the Seas and Carnival’s Breeze/Dream as passengers are drawn to the newest and biggest cruise ships with the best features.

The Breakaway is the first of two ships that are part of NCL’s Project Breakaway.  The Norwegian Getaway, will begin construction next year and is scheduled to sail from Miami in the spring of 2014.