Prices Drop on Carnival Cruises after Problems at Sea 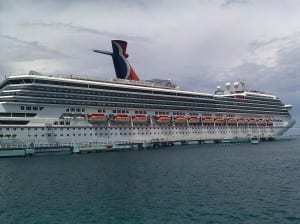 If you have been waiting to book your next Carnival cruise, there is some good news for you.  Prices have been cut across the board for most, if not all cruises on Carnival.

A travel agent with KHM Travel out of Brunswick, Ohio said that the prices for Carnival Cruises that he had been watching for some of his clients took a nice dip and he was able to get them some great deals on a cruise to the Caribbean.

He told Cruise Fever that clients began asking if prices had dropped a few days after the incident with the Carnival Triumph.  While some of his clients normally sail with Royal Caribbean, they were wanting to try Carnival, especially if the price was too good to pass up.

It is not uncommon for cruise lines to cut prices when bookings slow down or when they need to fill a particular sailing that has many unsold cabins.  However, it appears that Carnival has cut prices after a wave of negative backlash hit the company after the well known problems that several of their ships had earlier this year.

A research report from Morgan Stanley on April 4 blamed the incidents with Carnival ships and said that they resulted in “record levels of cancellations and very low bookings from new cruisers. We hadn’t seen such a negative report since the Concordia incident”.

The problems for Carnival started on February 10 when the Carnival Triumph had a fire break out in the aft engine room leaving the ship with minimal power and no propulsion in the Gulf of Mexico.  The ship being towed back to Mobile, Alabama was front page headlines across all major news networks and became the water cooler topic at most work places that week.

A little over a month after the Triumph incident, Carnival ran into more problems when the Dream and the Legend ran into mechanical problems just two days apart.  Carnival had to cancel a couple cruises on the Dream so repairs could be made.

Since these problems occurred, Carnival has stated that they plan to undergo a complete maintenance overhaul of all of their ships to make sure that these problems do not happen again.  However, the negative damage had already been done and while prices did not drop immediately after these incidents, they have now come down to Caribbean cruises being offered as low as $229 a person on the home page of Carnival.com.

It is not uncommon for cruise lines to lower prices in late spring which is generally a slow booking season.  However, these lower prices that are now being offered on Carnival are likely the results of the negative press that the cruise line has received in 2013.

Ben Souza
Ben is a world traveler who has visited 40+ countries and taken over 70 cruises. His writings have appeared and been cited in various media outlets such as Yahoo News, MSN, NPR, Drudge Report, CNN, Fox, and ABC News. Ben currently resides in Cincinnati, Ohio. Follow Ben on Instagram. Visit Ben Souza on Linkedin. You may email Ben at [email protected]
Cruise NewsPrices Drop on Carnival Cruises after Problems at Sea
Previous article
Royal Caribbean Introduces Quantum of the Seas With Skydiving, Bumper Cars, and Dazzling Effects
Next article
First Cruise Ships of 2013 Stop in Alaska