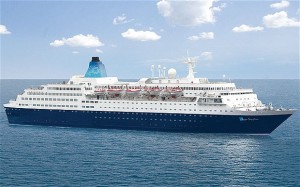 The maiden voyage of the Saga Sapphire cruise ship was cut short after the ship began having engine problems in one of the ship’s 2 engines.  The ship is currently in the harbour at Valencia, Spain awaiting repairs.  Passengers that were on this maiden cruise will be flown home to the UK on Monday.

This was first reported by John Honeywell, aka Captain Greybeard, an expert guide about cruise ships in the UK.

The maiden voyage of the newest ship in Saga Cruises’ fleet was scheduled to end in Southampton on Wednesday, April 18, 2012.  The inaugural cruise was delayed a week because its multi-million pound refit overran.  Passengers that were due to join the next voyage have been told that they will now be flown on April 25 to Marseille.

The gala welcome that was planned for Lisbon tomorrow will now be postponed until May 3.  The Sapphire will join with sister ships Saga Pearl 2 and Saga Ruby for the gala.

A spokesman for Saga Cruises said that the problem was with one of the two engines.  Captain Alastair McLundie said that it was possible to run the ship on just one engine, but the decision was made to bring the vessel in for repairs.

Passengers on board the Sapphire will receive a full refund for the cost of the remainder of the cruise, plus a discount towards a future booking.  Fares on the 23 night maiden voyage ranged from $5,000 to $14,000 in USD.  Passengers on the next cruise will miss 2 ports of call and receive a 50% discount on their fare.

Even though this was the maiden voyage for the Sapphire, the ship has been plagued with problems from a worker strike when the ship was being built.  Due to the strike, passenger capacity was cut from 752 to 706.  New bars and restaurants were put in the place of the cabins that were cut.