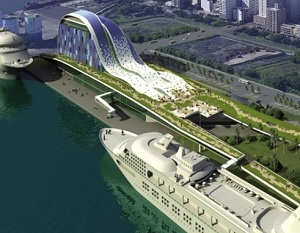 A Taiwan news website may have over-stepped its bounds with an article on a new cruise ship from Royal Caribbean at its ports.  The article details a 140,000 ton ship from the cruise line being sent to the region later this year, but the company itself has no details of this being the case at all.

In fact, our interactions with Royal Caribbean have only declared this “news” as gossip, telling us that the only 2 ships the company has in Asia are the Legend of the Seas and the soon-to-arrive Voyager of the Seas.

The supposed new ship would sail on routes between Keelung and Shanghai, and also provide sailings further east in Japan and South Korea as well.

Last year Taiwan saw 461,000 cruise passengers at Keelung Port, which is the busiest cruise port in the region and that number is expected to rise much higher with negotiations between China and Taiwan.

There have been major restrictions regarding foreign cruise ships that sail across the Taiwan Strait, but those restrictions are expected to be removed later this year, allowing for a whole new market to open up for Royal Caribbean and other cruise lines like Holland America.

In fact, those restrictions between China and Taiwan have already been easing as Holland America made its first stop in Taiwan in over 20 years.

With Singapore already beefing up its cruise port, Taiwan will play a major role with its port in Keelung, as its strategic location in maritime transportation lanes makes it a perfect destination for cruise liners as well.

There are very few cruise ships that are registered in China and Taiwan, and because of local regulations each ship has to get permission before it passes between the two land masses.  But there has been agreement on both sides to allow ships to pass without the required permission.

Taiwan is in a perfect position to become a major cruise hub, but there has been no word directly from Royal Caribbean itself on whether or not it will be sending a 140,000 ship to the area like the independent representative office in Tapei has suggested.

We will keep our readers up to date with any breaking news on this matter.

J. Souza
Jon got hooked on cruising after his first cruise on his honeymoon, and today he is always looking for cruise deals and reading information about the cruise industry. Jon lives in the foothills of North Carolina and wishes there were a cruise port that far inland. Jon can be reached at [email protected]
Cruise NewsRoyal Caribbean to Send 140,000 Ton Cruise Ship to Asia?
Previous article
Oasis of the Seas Rescues 23 Cubans at Sea
Next article
Norwegian Cruise Line Stars in Reality Show “Love For Sail”