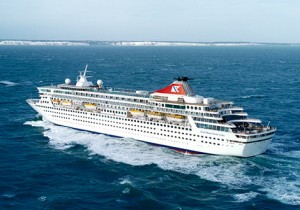 On April 15, 1912, the Titanic hit an iceberg and sank in the cold North Atlantic waters killing 1,514 people.  One hundred years later, the MS Balmoral is taking relatives and survivors on a retracement of the infamous voyage.  The 1,309 passengers paid between $4,445 to $9,520 each for what some passengers described as, “the opportunity of a lifetime” as they remember the sinking of the White Star liner.

The 12 night cruise will be unlike most modern cruise trips of this era.  The ship will have a live band playing music from the early 1900s, a tribute to the musicians on the Titanic that survivors have stated that played until the ship sank.  Many of the passengers were also dressed in clothing from the era.  The food served during the 12 day voyage will also be from the time period of the Titanic.  Organizers have tried to recreate the atmosphere of the Titanic to give the passengers a feel of what it was like 100 years ago.

The MS Balmoral will make a stop for a memorial ceremony where the Titanic sunk on April 15.  The ship needed to leave 2 days earlier than the Titanic because it is a slower and smaller vessel.  The memorial service will begin on April 14 at 11:40 pm, the exact time that the Titanic hit an iceberg.

There have been critics that have called the memorial cruise “in poor taste”.  Passenger Carmel Bradburn from Australia said that “Remembering those who died is not morbid”.

The MS Balmoral is owned an operated by Fred. Olsen Cruise Lines.  Their parent company, Harland and Wolff, built the Titanic.

Ben Souza
Ben is a world traveler who has visited 42 countries and taken over 50 cruises. His writings have appeared and been cited in various media outlets such as Yahoo News, MSN, NPR, Drudge Report, CNN, Fox, and ABC News. Ben currently resides in Cincinnati, Ohio. Follow Ben on Instagram. Visit Ben Souza on Linkedin. You may email Ben at [email protected]
Cruise NewsTitanic Memorial Cruise Departs from England
Previous article
Rhapsody of the Seas Emerges from Makeover as New Ship
Next article
Oasis of the Seas Rescues 23 Cubans at Sea