Media Turns the Carnival Triumph Incident Into a Circus 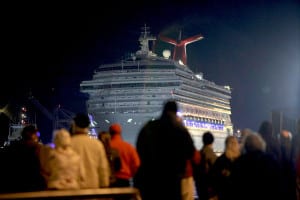 Leave it to the media to take the unfortunate incident that happened to the Carnival Triumph and turn it into a three ring circus.

When CNN had their cameras rolling in Mobile, Alabama last week, it was like they were waiting for the Apollo 11 to land in the Pacific Ocean.  They also had a helicopter hovering near the cruise ship as it was slowly being pulled into port.  Once again, the media turned the misfortunes of people into a reality show.

For the several days prior, we were told of horrible conditions on the Triumph.  We told that there was sewage running down the walls of the cruise ship, overflowed toilets flooded carpets, and that people were waiting four hours in line for an onion sandwich.  The media was painting a picture that the passengers and crew members on board were suffering in misery.

However, what was it really like on the ship?  I had a colleague who was on board the Triumph and this is the first thing that she said got off the ship, “we are fine and don’t believe everything that is being said. The biggest problem was the stupidity of some of the passengers”.

Yes, when the power went out on the Triumph, the ship’s toilets stopped working.  Passengers had to pee in buckets and had to relieve themselves in red bags until they were able to get some of the toilets operational.   If you are stuck on a broken down cruise ship in open waters and the worst thing that happens to you is that you have to pee in a bucket, do you really have it that bad?

Do you think the Mayflower had indoor plumbing? The Pilgrims spent 6 weeks on the ship while crossing the Atlantic.  Over 100 of them had to live in one room, with live animals.   Did the media bring this up?  Of coarse not because it didn’t fit the picture that they were painting.  The worse they made it seem, the more viewers would tune in to find out more.

One reader told Cruise Fever about a Fox News interview that he saw.  A reporter for Fox was interviewing a passenger who just got off the Triumph.  The passenger was telling him that he never went hungry and that he just made the best of the situation.  The reporter kept asking questions trying to get some negative responses to fit what they had been telling America for the past four days.

Would I want to be on a cruise ship that loses power?  No, not at all.  There is a reason why I go on cruises instead of camping out in the wilderness.

Yes, it stinks for those who were waiting for months for a great cruise vacation and then have this happen.  I feel Carnival took care of the passengers as best they could on the ship considering the circumstances.  They also received a full refund of their cruise fare, transportation costs reimbursed, a credit (equal to the amount they paid) for a future cruise, and $500 cash.

Lastly, were was the media when the Costa Allegra, Azamara Quest, and the Regina Rheni had similar problems in 2012?  While these incidents made the news, there was no 24/7 coverage on CNN, Fox News, MSNBC like they did with the Carnival Triumph.  They all had one thing in common, all of these ship fires happened in Europe and in Asia.  Bad news half way across the world doesn’t sell nearly as good as bad news in your backyard.

Remember, it is always the negative voices that draw the largest crowds.  As Americans, we need to do something about that.

Ben Souza
Ben is a world traveler who has visited 40+ countries and taken over 70 cruises. His writings have appeared and been cited in various media outlets such as Yahoo News, MSN, NPR, Drudge Report, CNN, Fox, and ABC News. Ben currently resides in Cincinnati, Ohio. Follow Ben on Instagram. Visit Ben Souza on Linkedin. You may email Ben at [email protected]
OpinionMedia Turns the Carnival Triumph Incident Into a Circus
Previous article
Cause of Fire in Carnival Triumph Engine Room Revealed
Next article
Titanic II Replica Cruise Ship to Sail Maiden Voyage in 2016