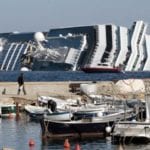 Search and rescue teams continue their search for survivors after the cruise ship, the Costa Concordia, hit a reef off Italy causing the ship to take on water.

Overnight, the bodies of 2 elderly were recovered near a restaurant, bringing the number of deaths to 5.  Both passengers were wearing life jackets and the cause of death was not immediately known.   The bodies were found shortly after a survivor had been rescued.  He was diagnosed with hypothermia but was expected to live.

There are still at least 17 passengers/workers that are still unaccounted for.  6 were thought to be part of the ship’s staff and 11 passengers.  The death toll could rise they they continue to search the half of the ship that is currently submerged in water.  Others that are missing may be in local hospitals or homes.  The chaotic and panicked evacuation has made it hard to track down survivors.  Two of the missing are Americans.

A Korean couple on their honeymoon were both found alive in their cabin after being trapped for more than 24 hours.  They heard rescuers calling out and made contact.  They were taken to a local hospital for care and it gave hope to rescuers that more will be found alive as they search the ship.  They are also holding out hope that some of the unaccounted for passengers reached land but have not reported their safe arrival with officals.

The captain of the ship. Francesco Schettino, has been are arrested for an investigation in manslaughter and abandoning ship.  First officer Verusio was also detained for questioning on similar charges.

The cruise ship hit a reef several hours after the cruise set sail.  The accident caused a 160 foot hole in the hull of the ship and it immediately began to take on water.  The captain tried to get the ship as close to shore as possible, although no mayday was ever called from the ship.  The original story published on Cruise Fever can be found here.

The ship hit the reef when the captain tried to perform “touristic navigation” to entertain the tourist that were on the nearby island of Giglio.  When cruise ships pass the island, they are normally at least 300 yards off shore.  The Concordia was only 150 yards off shore at the time of the accident.

Cruise Fever will continue to bring you the latest news and information as the rescue teams search the rest of the vessel.